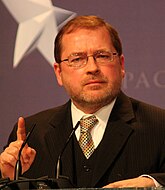 Grover Glenn Norquist (1956–) is a lobbyist, pundit, and political boss in the GOP who's basically the real-life version of Alex P. Keaton.

His political philosophy can be boiled down to two words: tax cuts. For this reason, those with perpetual tax cut fetishes are often called "Norquistas," as his appetite for tax cuts is pretty legendary.

Norquist is the founder and president of Americans for Tax Reform (read: Americans for Tax Cuts). The organization has gotten thousands of political officeholders at the state and federal levels to sign its "Taxpayer Protection Pledge", which is an agreement to never, ever raise taxes, ever.[7] The starve the beast strategy is pretty much synonymous with Norquist's name.

According to David Brock, Norquist keeps a picture of Lenin and quotes his advice, "Probe with bayonets, looking for weaknesses." It was a precept of the Nixon White House, for whom Norquist campaigned in the late 1960s. Norquist compares his efforts to take over the country via democratic means with a communist-style revolution.[1]

To illustrate what he meant, Norquist drew three intersecting circles on a piece of paper. In the first one he wrote "guns," in the second he wrote "taxes," in the third he wrote "faith." There was a small area where the three circles intersected. "With that group, you can take over the country, if you start with the airports and the radio stations," he said. "But with all of the three circles that’s sixty per cent of the population, and you can win politically. And if you add more things, like property rights and home-schooling, you can do even better.”

Norquist has never held an elected office. Why would anyone sign his ridiculous pledge? Because the right is authoritarian, that's why. They like "promises" and "pledges" and whatnot. Pledge of Allegiance, virginity pledges, oaths to the Constitution, etc. It's kind of a self-fulfilling prophecy. He's powerful because he's powerful. His "pledge", which has been going on for 20 years, sinks his hooks into Republicans at the state level, so if anyone breaks it now, it's easy to detonate it in a future primary. (He swore up and down not to raise your taxes, and look what he did! He breaks promises!) It was stupid of Republicans to ever limit their options like that in the first place.

The estate tax is particularly evil according to Norquist. In fact, it's just like the Holocaust!

We don't wonder what Jews, in which a large majority vote Democratic, think about that logic.

Praise Be to Saint Ronnie[edit]

To the surprise of absolutely nobody, Norquist has a gigantic man-crush on Ronald Reagan, though he takes it a bit further than others.[9] He is currently the leader of the Reagan Legacy Project, an organization created for the sole explicit purpose of naming stuff after Reagan to trick people into thinking that he was a worthwhile leader (read: god among men). Parks, roads, post offices, Washington’s National Airport, and many other landmarks have been named after Reagan under this Project. Norquist has tried to make Reagan’s birthday a national holiday and has floated the idea of having Ronnie’s head replace that of Theodore Roosevelt on Mount Rushmore. Norquist has gone on record deriding Roosevelt as a “statist and progressive Republican”; it would seem that, in Norquist’s eyes, doing something for the benefit of non-wealthy people is an unforgivable mortal sin (maybe with the slight exception of cutting taxes, but then again, he and his cronies will only benefit more).

Norquist was involved with weapon sales to the Contras during the Iran-Contra affair[10] and helped Jack Abramoff launder some money.[11] However, these were small bumps in the road compared to the scandal involving Mr. Norquist and his liaisons (wink wink) with several taxes, including an estate tax.[12]

Norquist has been the target of criticism from wingnuts due to his efforts at minority outreach. He helped co-found the "Islamic Free Market Institute" and has a Palestinian wife, so he obviously has ties to the Muslim Brotherhood (if you're professional lunatic Frank Gaffney)![13] This doesn't help Norquist with certain foreign and American groups who have a vested financial interest in spreading the patent fiction that America is rapidly coming under the sway of sharia. Gaffney's voice was joined by a chorus of the usual GOP whack-jobs, like Bachmann, Horowitz, Gohmert, and Beck, all of whom are insistent that Grover Norquist and former GWB administration official Suhail Kahn are both surreptitiously appointing the Muslim Brotherhood to important posts within government agencies.[14][15][16]

He also sits on the board of GOProud, so he must be attempting to advance homosexual recruitment the homosexual agenda (if you're the Family Research Council)!

It should come as no surprise that Norquist supports the right-wing's favorite pseudosciences. Americans for Tax Reform has been spewing global warming and DDT denial for quite some time.[17] It is also part of the Cooler Heads Coalition. Norquist has also voiced support for Intelligent Design. As to whether it should be taught in schools, however, he doesn't really care because public schools are the work of the government (read: Satan):