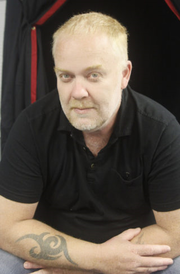 Warren Caylor (1969–) is a British spiritualist medium who has been accused of fraud throughout his career.

Caylor was born in Tumbridge Wells, Kent. In 1979, he claimed that he knew of his father's death before the police knocked on his door and told him the news the next morning.[1] He has made a career working as a direct-voice and physical medium.[2] It is alleged that he can produce apports,

ectoplasm, levitations of objects and direct voice communication with the spirit world.[3]

Caylor has been accused of fraud by sceptics and those from his own spiritualist community.

In 2007, spiritualist medium Jackie Mecke, who attended a séance, described Caylor as a "complete fraud" and suggested his séance phenomena were like a "puppet show in a darkened room".[4]

It was discovered in 2007 that a séance sitter had a dictaphone device in their possession which Caylor knew about. According to an article in the Paranormal Review, "sceptics could argue that the presence of such a device (which can play back as well as record) might explain some of the 'voice' phenomena produced."[5]

Skeptic Jon Donnis has written that Caylor's "seances are nothing more than silly magic acts."[6]

Gary Mannion, himself a fraudulent spiritualist medium,[note 1] accused Caylor of fraud at the Australian Academy of Spirit (AAS). According to a report by Psychic News,

"Warren arrived, was accused of fraud by Mannion and after some very unfortunate incidents Caylor got on a plane back home before the symposium started."[7]

On one occasion, Caylor was actually observed in an act of deception by two séance sitters, Caroline Smith and Michelle Skyrne. He was supposed to be tied to his seat but was observed doing something else:

Unfortunately for the medium, just as the spirits started to send luminous signs of their presence, enough light from a passing car got in through cracks in the window panels for his audience to see him out of his seat, the bindings removed, waving a pair of what looked suspiciously like glowsticks… Caylor, sensibly enough did not hang around long enough for Skyrne or Smith to demand a refund. They considered going to the police, but decided that their chances of success were too slim for it to be worth bothering with.[2]

Caylor's ectoplasm that he produces during séances looks like cheesecloth or in other cases the thing that you wipe your ass with. A report in The Independent noted it looks an "awful lot like toilet roll".[2]