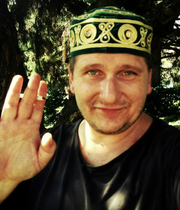 Kai Muegge or Kai Mügge (1968 - ) is a fraudulent German spiritualist medium and founder of the Felix Experimental Group (FEG). He is best known for producing fake apports and ectoplasm cobwebs during his séances.

Muegge has confessed to utilizing an LED device to perform trickery during his séances.[1]

Muegge claims he experienced poltergeist phenomena at a friend's house when he was 11.[2] By the age of 15 he had founded his own séance group and experimented in table tilting. Muegge, acting as a medium, later formed the Felix Experimental Group (FEG) in 2005. The group is based in Hanau, Germany.[2]

Before his career as a fraudulent medium, Kai Mügge made short films with little success about the drug scene in Frankfurt, where he belonged to. Only in this way he could film undiscovered as an insider. Babylon TV Babylon TV in youtube

Mügge was heavily drug addicted and is now methadon substituted. This is the reason, why he hasn´t got his driving license anymore and doesn't drink alcohol. Alcohol will lead to a respiratory paralysis in combination with methadon. Already because of his own drug addiction in combination with his massive abuse of painkillers, Mügge´s pretended condition of trance is abstruse. 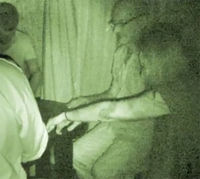 Stephen E. Braude participating in a bogus table "levitation", at the Felix Circle.

Muegge is known for producing apports

He is also known to use Halloween spider web as ectoplasm during his séances.[2][6]

Many of Mügge´s freak shows take place at the Basler Psi Verein (BPV), a place well known for hosting fraudulent mediums. The price for one show is about 180 CHF and it is not clear how Mügge has handled this income, because he used to receive social security from the German government.[citation needed]

Muegge has been described as a fraud by those in the parapsychology community. Researchers have suggested that all his séance phenomena can be produced naturally by trickery.

Peter Mulacz, Vice President of Austrian Society for Parapsychology who observed Muegge during séances in 2010 wrote:

In Mügge's case, we have the fake cobwebs. Where there is conscious and deliberate fraud it is absurd to speculate whether some of the ostensible phenomena might perhaps be genuinely paranormal (although the desire of some disappointed observers ‘to save what can be saved’ is psychologically understandable) and it is a waste of resources — time as well as money — to continue investigations of such pseudo-mediums. From my observations, I conclude that Kai Mügge's 'physical mediumship' is a deliberate deception from beginning to end.[7]

Parapsychologist Michael Nahm investigated Muegge's group in a total of 21 séance sittings. In 2014, Nahm published a paper in the Journal of Scientific Exploration which concluded "considerable parts of the phenomena were produced by fraudulent means."[2] According to Nahm there is convincing evidence that Mügge had utilized a magician's LED device to produce "spirit" lights, which he later confessed to.[6] In 2016, parapsychologist Stephen E. Braude noted:

For one thing, when Michael Nahm and I published our 2014 reports on the FEG (Braude 2014, Nahm 2014), we already knew that Kai had cheated on at least one occasion (not supervised by me), by using a light-emitting device similar to a magician's trick called the D'Lite Flight. That device employs a diode at the end of a very thin wire attached usually to the user’s thumb, which can make it appear as if points of light are moving around in the vicinity of the magician. In 2011, regular Felix Circle investigator Jochen S. (pseudonym) took two series of photographs, (remarkably, in retrospect) at Kai's request, from séances in Koblenz, Germany. From the start, the reddish lights shown on those photos looked suspicious to Jochen, and quite unlike the more convincing lights he'd seen at a distance from the medium. After Jochen shared the photos with Nahm in 2014, Nahm noticed that they revealed how the movement of Kai's thumb corresponded to the movement of these lights, just as they would if Kai had been using a device like the D’Lite Flight. Thereafter, Jochen also revealed to us that he had discovered a light-emitting device in Kai’s travel bag after one of the Koblenz séances. Furthermore, he told us that after he confronted Kai with the combined evidence of his finding in 2011 and Nahm’s discovery about the photos in 2014, Kai apologetically admitted to using the device and to having concealed it on the shelves behind his curtained "cabinet" during the séances in Koblenz.[1]

There is another site of a former duped member of Mügge's felixcircle, which shows Mügge's fraudulent activities with the D’Lite Flight in action: [8]