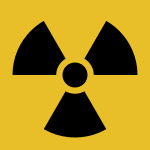 If you're not a trained professional and get near anything that even looks like this, stay away.

Weapons of mass destruction (WMDs) are devices capable of inflicting deaths several orders of magnitude greater than conventional ordnance. Examples include nuclear warheads, missiles designed to deliver biological agents such as anthrax, and shells carrying mustard gas or sarin. They are sometimes referred to as "chemical, biological, radiological, and nuclear" (CBRN) or "atomic, biological and chemical" (ABC) weapons. Today, some countries, such as France, India, North Korea, Pakistan, Russia, the United Kingdom, and the United States, have declared nuclear arsenals at their disposal.[2]

Moreover, there is a lot of talk about keeping terrorists from acquiring WMDs, forgetting that some terrorist groups (like Aum Shinrikyo) have already used WMDs to little effect. In fact, Al Qaeda managed to do a lot more damage with boxcutters than Aum Shinrikyo did with sarin.

As they release much more energy than chemical explosives, nuclear weapons are capable of causing immense civilian casualties in a very short amount of time. Luckily, only two such weapons have been used in anger thus far. Because of the sophistication of actual nuclear weapons it is unlikely that non-state actors would have the resources to develop a bomb by themselves (although it is possible that a state could give away a bomb, sell a bomb, or have one stolen). A greater risk is a terrorist group seeding a conventional explosive with radioactive material creating a "dirty bomb."

Biological warfare involves attempting to infect the enemy with a contagious virus, bacteria, fungi or parasite that will cause them to die or be incapacitated. Biological warfare was used in antiquity, as warring factions often disseminated dead people and animals to enemy cities in order to cause the inhabitants to become sick. Although they were prohibited by the 1925 Geneva Protocol, proposals for use of biological warfare in World War II existed, such as the UK's Operation Vegetarian, which involved dropping infected cakes onto German cattle fields so that when the cattle's meat and milk were consumed the consumer would become fatally sick, causing millions of deaths. During World War II, Unit 731 of the Japanese conducted biological warfare, resulting in the torture and death of many thousands.[3]

In 1972, a United Nations resolution prohibited the production of bioweapons, though several nations are still suspected of owning them. Terrorists have also attempted to use or acquire biological agents, most notably the Osho cult which tried to use salmonella to poison voters in an election.

Although chemicals had been used as tools of war for thousands of years—e.g. poisoned arrows, boiling tar, arsenic smoke and noxious fumes, etc.—modern chemical warfare has its genesis on the battlefields of World War I.[4] The first full-scale deployment of deadly chemical warfare agents during World War I was at the Second Battle of Ypres, on April 22, 1915, when the Germans attacked French, Canadian and Algerian troops with chlorine gas. Deaths were light, though injuries relatively heavy. The various powers soon developed more potent agents, such as Sulfur Mustard ("mustard gas"), phosgene, sarin, and VX. Other notable uses in warfare after World War I include the Iran-Iraq War and several reported chemical attacks in Syria. In early 2018 a nerve agent was deployed by the Russian government in an attempted assassination of an ex-KGB spy in the UK that left him, his daughter, and a Police Detective comatose and is believed to have less severely impacted at least 120 more.

by followers of the Aum Shinrikyo cult. Many modern chemical products can be repurposed for use as a weapon (Chlorine, for example, is found readily available since it is used to disinfect water supplies) so there is a greater risk of this type chemical terrorism than nuclear or biological.

The casus belli of the 2003 invasion of Iraq was the insistence by the Bush Administration that weapons of mass destruction really were present in that country, despite the fact that the regime denied the charges, and UN weapons inspectors Hans Blix and Dr Al-Baraday found nothing.

Subsequent to the war, Saddam Hussein was deposed and US forces occupied the country and searched every square inch for any evidence of weapons of mass destruction. They turned up nothing they admitted to — and neither are they likely to as they concluded the weapons didn't exist and stopped looking for them shortly after the end of the invasion. It's puzzling. At the Press Correspondent's Dinner in 2004 Bush looked for WMDs under the papers he had arranged on the podium and he still didn't find anything.

In reality, Saddam did have chemical weapons at one point, which Ronald Reagan very generously supplied during the Iran-Iraq War.[notes 1] They were degraded and largely dismantled by the 1990s. Nonetheless, some soldiers were injured by abandoned chemical weapons.[5]