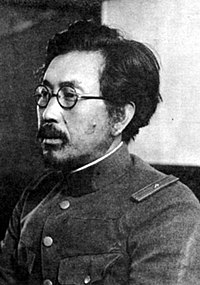 Disease Prevention and Water Supply Unit 731 was a very large Japanese biological warfare team, that primarily experimented on civilians of various ethnicities, mainly Russian and Chinese, but also Manchus, Mongolians, and others. It was part of the Kwantung Army (關東軍), which was the most prestigious of Japan's armies. It was located in Pingfang (平房区 or 平房區), in what was then Japanese Manchukuo (Manchuria) and is now part of China. It started operations in 1932 and continued through World War II. Victims at Pingfang included hapless civilians, common criminals, and alleged spies.[1] From 1942-1945, more than 1000 Allied soldiers were also experimented upon by Unit 731 at a prisoner of war camp located in Mukden (now known as Shenyang, 沈阳).[1] General Shirō Ishii

(石井 四郎) was the mastermind, creator and leader of the unit.[1]

The Unit 731 annual budget was larger than that of any Japanese university,[1] and was reportedly as large as the total tax revenue of Manchoukuo.[2]

The unit performed vivisections without anesthetic and conducted experiments in the field of biological warfare on their unfortunate victims. Other experiments on victims included frostbite treatment, syphilis experimentation (including rape and forced pregnancy), grenade testing, centrifuge testing, testing of flamethrowers, and other gruesome experiments. After the war ended the entirety of Unit 731 was given immunity by the United States in return for the unit's data.[2] An estimated 3,000 prisoners were killed at Pingfang during the experiments, which left no prisoner alive.[3] There were survivors at the Mukden camp, but attrition was very high.[1]

Unit 731 also spread biological weapons over Chinese cities and against Chinese troops. These usually resulted in minor epidemics, but in the case of the 1942 Chekiang (Zhejiang-Jiangxi, 浙赣战役) campaign

, "germs of cholera, dysentery, typhoid, plague, anthrax and paratyphoid were all used", and Chinese losses from disease were very high but "inestimable". Disease spread back to the Japanese army with casualties of more than 10,000.[4][1][notes 1]

A smaller Japanese army unit, also located in Manchuria, known as Unit 100 was also conducting germ warfare testing on prisoners. Unit 100 was operated under the Kempeitai, the Japanese military police.[1] Two other units were involved in biological warfare research: Detachment Nami 8604 (or Unit 8604) and Detachment Ei 1644 (or Unit 1644). Unit 8604 was under the command of the Japanese Southern China Area Army, located in Canton (Guangzhou), China. Unit 1644 was located in Nanking, China and conducted human vivisections.[2][5]

Japanese activity in the area of biological warfare was strongly suspected by the US as early as 1939,[1] and the first public documentation of Japanese biological weapons was on April 9, 1942 with a thorough report by Dr. P. Z. King that was published in July 1943 in The China Handbook (pp. 679-682).[4]

Towards the end of the war, the Soviet Union invaded Manchuria (under the terms of the Yalta Conference between the Allied Powers) and captured a few key personnel from Unit 731. Other members of the unit eventually managed to return to Japan, often secretly.[1] The Pingfang site was found in near total destruction, having been destroyed by Unit 731 before the advance of Soviet troops. Almost all of the documents were destroyed by the unit.[1]

The Tokyo War Crimes Trials took place during 1946 to 1948. They were not the only war crime trials of the Japanese, but they were the primary trials. Despite having copious evidence of biological warfare having been conducted by the Japanese, no charges were filed against members of Unit 731. The United States government had contact with Unit 731 members in Japan and interviewed them extensively, including Ishii.[1] General Douglas MacArthur (who was then the Supreme Commander for the Allied Powers in Japan) gave immunity to Ishii and all other members of the unit.[1] The Soviet Union had repeatedly asked that Ishii and the other members of Unit 731 located in Japan be tried as war criminals, but they had little influence within Japan.[1] Among the enormous amounts of documents presented at the Tokyo War Crimes Trials, only brief — and perhaps accidental — mention was given to biological weapons.[1]

In December 1949 in the border city of Khabarovsk, the Soviet Union tried and convicted 11 members of Unit 731 and one member of Unit 100. The trial was based on evidence from a few key documents and the confessions of those on trial. The trial was closed to Western observers. The prison sentences ranged from 2 to 25 years in a labor prison camp.[notes 2][1][5]

According to Kojima Takeo, a captain in the Shantung Army who spent time at Unit 731, he was among the 1050 prisoners who were considered war criminals and were sent to China from Russia in 1949 for further imprisonment.[2] Not all of the prisoners were necessarily affiliated with Unit 731, but they all would have been captured in northern China. 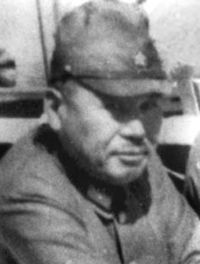 Why were the Unit 731 members, other than those captured by the Soviets, never tried? Both the Soviet Union and the US were keen to get as much information as possible on biological weapons. This was shown by the extensive interviews by US officials of Unit 731 members, the closed Khabarovsk trial, and the one-time joint interrogation of Ishii by the Soviets and the US (later denied by the Soviets).[1] The United States wanted to obtain Japanese information about biological weapons and the only way to gain detailed information seemed to be to offer immunity. The Soviet trial at Khabarovsk showed that this was not necessarily the case, but a closed trial in Japan was probably not feasible. MacArthur's offer of complete and total immunity may have been excessively broad. The immunity, however, was a betrayal by MacArthur of his own troops, a few of whom were abandoned by MacArthur in the Philippines, and later transported to Mukden by the Japanese, winding up as guinea pigs for infection experiments.[1] The Khabarovsk trial had been essentially dismissed by the US as a show trial by the Soviets,[1] though it has now been established that the confessions and evidence reported from the trial were essentially completely accurate.[1][5]

Many of the scientists and medical doctors of Unit 731 went on to have scientific careers after the war at universities, research institutes and pharmaceutical companies. Two important figures at Unit 731, Lieutenant-Colonel Ryoichi Naitō and Lieutenant-General Masaji Kitano

, which would later be embroiled in a scandal for knowingly importing HIV-tainted blood into Japanese blood banks. Naitō even became a member of the New York Academy of Sciences.[1][7]

The nearly-complete list of members of Unit 731 was finally revealed by the National Archives of Japan in 2018 after being petitioned by a group led by Katsuo Nishiyama, professor emeritus of Shiga University of Medical Science.[8] The list of 3,607 members includes "52 surgeons, 49 engineers, 38 nurses and 1,117 combat medics".[8]

The table below shows the activities before and after the war of unpunished members of Units 731, 100 and 1644, and of people who held academic positions that facilitated the units' activities. All information is based on Williams & Wallace[1] and Gold.[2] All positions during the war are at Unit 731 unless otherwise noted.

During 1993-1994, an exhibition concerning the activities of Unit 731 toured 61 locations in Japan. It included both written and in-person testimony from surviving Unit 731 members. A large part of the testimony was translated and published by Gold.[2] The testimony largely corroborated previously published evidence.