Colin Luther Powell (1937-2021) was a Four Star General of the United States Army and the first African-American to serve as the Secretary of State.[1] Powell in particular served under Bush and was responsible for selling the now infamous lie that "Saddam Hussein had weapons of mass destruction" to the UN prior to the catastrophe that was the Iraq War. He also served as Chairman of the Joint Chief of Staff under George H. W. Bush during the Gulf War.[1]

During his tenure as head of the Joint Chief of Staff, Powell had to deal with over 24 different crises, including the 1989 Invasion of Panama

during the aforementioned 1991 Gulf War. Powell was known for his reluctance to use military power as a weapon of first resort, instead preferring to utilize diplomacy instead. This had earned Powell the epithet "Reluctant Warrior," as Powell's military stratagem revolved around maximizing success while minimizing casualties.[2] 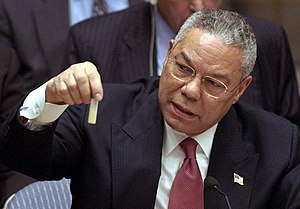 Powell waves around a model anthrax vial before the UN in 2003. Iraq had no anthrax.

Powell was Secretary of State while Bush was POTUS, and hence was suckered into invading a country that had absolutely nothing to do with 9/11 in the first place. Powell initially opposed deposing Saddam,[4] but he ultimately acquiesced to Shrub's demands. Powell was tasked with presenting the case for invading Iraq to the UN General Assembly, and he dutifully went ahead.

His 2003 speech to the UN is now as infamous as it was farcical. During his presentation he stated that he believed "without a doubt Saddam is conducting biological weapons programs", citing anonymous "Iraqi defectors" as his sources.[5] In an amusing twist, though, it turned out that Powell's "source" was a plagiarized paper from an unaccredited Iraqi-American graduate student.[6] That's not the end of the absurdity. In one section of the presentation, he mentioned Iraqi-based terrorist Abu Musab al-Zarqawi's name 21 times in an attempt to establish him as the link between Iraq and Al-Qaeda.[7] The first problem was that Zarqawi was a nobody who had met with Bin Laden maybe once ever and was considered a piss-poor recruiter by his superiors.[7] The second problem was that Powell's speech turned Zarqawi into a fucking celebrity and greatly improved his ability to build Al-Qaeda's ground presence in the country, especially after the invasion.[7] He also used the memory of the 2001 anthrax attacks to stir up fear over what Iraq could do with a similar weapon and that perhaps Iraq had even been responsible. The problem? Shortly after the attacks, the FBI hired microbiologist Paul Keim to investigate, and he proved that Iraq was not responsible.[8] The Bush administration ignored this finding, and anthrax became an issue in Powell's speech years later. The rest of Powell's speech was filled with omissions, mis-translations from Arabic, and faulty intelligence.[3]

Powell later resigned from the position of Secretary of State, however even after resigning he continued to support the war in Iraq. Although clarifying that he opposed the decision to go to war in the first place, he still stood by Bush's fateful and awful decision.[9]

See the main article on this topic: Stopped clock

Colin Powell died in October 18, 2021 due to complications caused by COVID-19 despite having been fully vaccinated, as his multiple myeloma

cancer left him severely immunocompromised.[19] Almost immediately, a plethora of anti-vaxxers, far-right morons, and all-around spineless bastards (including Fox News hosts John Roberts, Will Cain, and of course Tucker Carlson) tried to use his death as a platform to rant about the inefficiency of vaccines.[20][21]