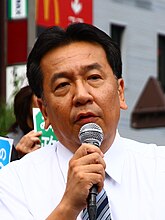 Yukio Edano (枝野 幸男) (1964–) is a social liberal politician in Japan. He is the leader of Japan's main opposition, the Constitutional Democratic Party

of Japan. He is called the last hope of the Japanese 'liberal camp'.

This article is a stub.
You can help RationalWiki by expanding it.
Retrieved from "https://rationalwiki.org/w/index.php?title=Yukio_Edano&oldid=2284796"
Categories:
Hidden categories: