From RationalWiki
(Redirected from Shinzo Abe)
Jump to: navigation, search

I'm ahead of Trump!

Shinzō "Trump before Trump" Abe（安倍 晋三) (1954–) is a former Prime Minister of Japan and President of the Liberal Democratic Party (LDP) — despite the name, it is a conservative party.[note 1] He served two terms as prime minister - from September 2006 to September 2007 (succeeded by Yasuo Fukuda) and from December 2012 to September 2020 (succeeded by Yoshihide Suga).

He is a Japanese far-right[2][3] ultra-nationalist, reactionary conservative who supports a Shinto, historical revisionist agenda. He is a member of the hard-rightist faction within the LDP. One of Abe's grandfathers, Nobusuke Kishi,

was also Japanese Prime Minister (1957-1960). Kishi was an untried war criminal from World War II, a serial rapist and racist who oversaw a system of slave labour and drug trafficking whilst economic tsar of the puppet state of Manchukuo. As PM, Kishi used his Yakuza connections both to enrich himself and then in an attempt to overthrow his own political party for not being right wing enough, only being stopped by the largest protests in Japanese history.[citation needed] Abe is a senior member of the Nippon Kaigi, an ultra-nationalist group that is homophobic, misogynistic, racist and historical negationist with a reverence for the former Japanese Empire and Emperor worship, with many members of his cabinet being fellow members of the group. Particularly nasty cabinet members include former prime minister and current deputy prime minister Tarō Asō who once amongst a litany of offensive statements stated Hitler had the "right motives"[4] and former Defence Minister Tomomi Inada who denies the Rape of Nanjing and has been compared to Sarah Palin and Marine Le Pen.[5]

Japan's strict immigration policies, relative ethnic homogeneity and denial of historical war crimes have made it somewhat of a model for the international far-right - Steve Bannon admired him so much that he said, "a great hero to the grassroots, the populist, and the nationalist movement through the world." He even praised Abe as "Trump before Trump."[6][7] The LDP, since its creation in 1955, has also harboured far-right factions and politicians but since the government of Junichiro Koizumi that faction has grown ever stronger. As a result of this, the LDP, similar to the Republican Party, had largely absorbed the far-right into its electoral coalition and increasingly pander to it rather than it existing as a separate party as in countries such as France and Germany.

Comparisons to Trump should be treated with caution, however, as naming Abe as a populist is a stretch. Abe comes from a political dynasty - his father was foreign minister during the 1980's, his maternal grandfather and granduncle were both prime ministers in the 1950's-1970's and his bother is the current defence minister - and he is personally seen as aloof and uncharismatic.[8] His rhetoric, whilst extreme, is not anti-elitist which differentiates him from Japanese leaders who are often seen as populist, such as former prime ministers Kakuei Tanka and Koizumi and Osaka Governor Toru Hashimoto.[9] Abe's pet issues of revising the constitution and adopting a more nationalistic education system are broadly unpopular - when Abe focused on them in his first premiership, his approval rating tanked and he resigned after a year in office.[10]

Abe can be better seen as a wannabe authoritarian who is more concerned with amassing power around himself rather than rigidly enforcing an unpopular ideological agenda. Under his governance, Japan has been ruled in a notably more authoritarian manner with Japan’s ranking in the World Press Freedom Index falling from 22nd place in 2012 when he took office to 66th in 2020. Abe also has cut committee meetings to scrutinise government policy in the Diet and implemented draconian legislation such as the 2017 anti-conspiracy law which significantly increases surveillance in Japan.[11] He suppressed the liberal national newspaper Asahi Shimbun, and when Abe met with Donald Trump in 2017, he reportedly said said, "I’ve been successful in taming the Asahi Shimbun. I hope you will likewise be successful in taming The New York Times." Abe is also reported to get on well with other authoritarian leaders such as Recep Tayyip Erdoğan.[note 2]

But despite this and massive parliamentary majorities attained through exploiting opposition weaknesses, electoral gerrymandering and voter apathy (the LDP received fewer votes in their 2012 landslide victory than in their 2009 defeat as turnout plummeted) Abe has largely shied away from implementing the more controversial aspects of the Nippon Kaigi agenda. It is not particularly popular overall with Abe's post-2012 image as a mainstream politician extolling Japan as a nation of the free world being more attractive both domestically and internationally - but also because Abe, as a bona-fide ultranationalist, largely does not need to worry about the far-right making a challenge against him, as they already support him without reservations.[12] This has helped Abe somewhat keep the most vocal elements of the far-right quieter on issues such as the Senkaku islands (which the previous liberal government was constantly under pressure to look tough on China) and thereby erroneously contributed to his image in the West as a "defence against populism". As an opportunist, Abe will rarely pick fights with Japan's larger neighbour due to the fear of being economically squeezed and thereby losing voter support, instead indulging his far-right supporters by attempting to bully the smaller South Korea over historical revisionist issues.[13]

Another indicator of his opportunism is his relationship with Yasukuni Shrine, a Shinto shrine that holds several class-A war criminals from the WW2 era and which in the past prior visits by Japanese prime ministers such as Yaushiro Nakasone and Koizumi have aroused protests from the Korea's and China. When Abe visited the shrine in 2013[14] backlash from China and South Korea meant he refrained from further visits in his premiership - but showed where his true colours lay shortly after his resignation as Prime Minister he prayed at the shrine again.[15]

Unsurprisingly, Abe is also incredibly corrupt but unlike previous LDP leaders has consistently refused to resign over corruption scandals. He had a big political scandal in 2017, which is the allegation that he secretly sponsored a radical kindergarten that teaches anti-Korean far-right nationalist ideas. If true, this is a clear abuse of children, let alone racial discrimination against Koreans.[16] 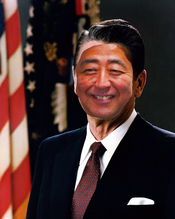 Abe is also known abroad for his "Abenomics" programme that consists of three features - monetary stimulus, fiscal stimulus and structural reform.[note 3] The first two goals are broadly Keynesian - monetary stimulus including slashing interest rates and devaluing the yen to make Japanese exports more competitive, whilst fiscal stimulus has seen the Japanese government embrace huge raises in government spending. However the third arrow - structural reform - is designed to continue the neoliberal reforms of Abe's predecessor Junichiro Koizumi including deregulation particularly in the labour market and opening up Japanese markets through free-trade agreements such as the Trans-Pacific Partnership. These policies have been compared to the similarly loose monetary policy and neoliberal reforms of Ronald Reagan.[18] The effect of Abenomics has been to lead to higher wealth inequality in Japan due to it being based the same principle of trickle-down economics adopted in North America and Europe and as such more benefit Japan's already-dominant corporations then the general populace.[19]

Just being a total asshole[edit]

Abe became the longest serving prime minister of Japan in November 2019[20] surpassing imperial-era prime minister Katsura Tarō and achieved the longest single term on August 24 2020 surpassing his grand uncle Eisaku Satō. Abe achieved this long term through a mixture of his adroit handling of factional politics, a weak and divided opposition providing him with little electoral challenge and a widespread view that there was no alternative within the ruling party. Japan from 2006-2012 had cycled through a prime minister a year, and as mediocre as Abe was, he represented some semblance of stability. This combined with a compliant press, fawning support from the LDP and business community and a strong authoritarian approach allowed Abe to weather scandals and bursts of unpopularity.

Like his peers Trump, Boris Johnson and Jair Bolsonaro, Abe came under fire for his handling of the COVID-19 outbreak in Japan. Although Japan recorded less infections per capita then other G7 countries this was mainly credited to prefectural leaders and the ever-efficient bureaucracy with Abe criticised for indecision, attempting to protect the economy and 2020 Tokyo Olympics over health concerns and being out-of-touch with citizens.[21][22]

Facing low approval ratings and a resurgence of his ulcerative colitis condition (which had previously been the catalyst for his resignation in 2007) on August 28th 2020, Abe resigned from the premiership.[23] His successor, former cabinet secretary Yoshihide Suga, was strongly supported by Abe and his faction in the ensuring leadership allowing the latter to easily become LDP president and prime minister on a platform of continuing Abe's core policy priorities.[24]

Abe has since resigning retained a dominant role in the LDP and by extension Japanese politics, being the unofficial leader of the ultranationalist faction of the LDP. Certain former prime ministers often remain powerful after leaving office as so-called "shadow shoguns", controlling the factions within the LDP to appoint puppet prime ministers who appoint the "shadow shoguns" allies to cabinet.

Following the resignation of Suga in 2021, Abe moved to secure control over the next prime minister. The most popular candidate amongst the general public, Taro Kono, was a reformist who implicitly threatened the hold Abe and his allies such as Tarō Asō had over the party. Abe subsequently endorsed the campaign of a fellow far-rightist, Sanae Takaichi, rather then that of former foreign minister Fumio Kishida who has long been seen as being groomed for the premiership and was the best shot of defeating Kono. However Kishida is a moderate and by endorsing Takaichi Abe and his allies gambled on in the event of a leadership race entering a second round they could cut a deal with Kishida giving him Takaichis votes in exchange for Kishida tacking to the right and adopting core Abe policies. The gambit paid off with the anti-Kono vote consolidating around Kishida handing him the premiership.[25] Kishida subsequently appointed key Abe allies including Takaichi to senior leadership positions as well as embracing more Abe-esque rhetoric on China. Abe therefore remains the power behind the throne and his key policies will most likely continue.[26]