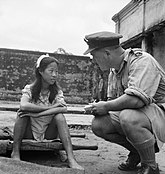 "Comfort women" was a euphemism used by the Japanese military and government from 1932 to 1945 for women used in officially-organized sexual slavery (or forced prostitution).

During the 1930s and 1940s, Japan's colonial satellites (Korea, Manchukuo,[note 1] Taiwan, Japanese-occupied parts of mainland China and of the Greater East Asia Co-Prosperity Sphere) forced women to become sexual slaves of the military. Even Japanese women were forced to become sex slaves of the Japanese army.

Controversy over and protests against the term "comfort women" persist, especially from surviving women and in the countries from which they were taken, about how wrong it is to continue referring to the women as "comfort women" when in fact they were "sex slaves".

Modern Japan's right-wing to far-right have been trying to discredit the claims of 'comfort women'. Denialist arguments come in four main flavors:

Shinzō Abe's government is particularly energetic when it comes to shutting down discussion of comfort women. In recent times, Japan has made numerous attempts to stop the construction of comfort women memorials,[15] harassed foreign media for reporting on comfort women,[16] harassed foreign textbook publishers,[17] and encouraged domestic newspapers to redefine the definition of the term "comfort women" from "women who were forced to provide sex for Japanese troops before and during World War II," to "Women who worked in wartime brothels, including those who did so against their will, to provide sex to Japanese soldiers."[18][3]

In 2015, China opened its first memorial hall dedicated to Chinese comfort women in Nanjing.[19] The symbolic significance of that particular location is like being poked in the eye. About a year later, China opened a comfort women museum in Shanghai to help expose the crimes of the Japanese military; items on display include discarded condoms, photographs, and victim testimonies.[20]

Comfort women memorial statue in front of the Japanese embassy in Seoul.

The South Koreans are arguably even angrier. A civic group installed a 1-ton memorial statue of a woman symbolizing all of Japan's Korean sex slaves directly in front of the Japanese consulate in Busan.[21] The Japanese government took that about as well as you might imagine. The issue turned into a serious diplomatic meltdown when Japan withdrew two top-level diplomats from South Korea and then halted trade talks.[22] Japan's Chief Cabinet Secretary commented on the dispute by saying "The fact that the girls' statue was set up has an unfavorable influence on relations between Japan and the Republic of Korea, and it is extremely regrettable."[23] There's also a memorial statue in front of the Japanese Embassy in Seoul, facing the entrance with an angry expression and clenched fists.[24] The South Korean government itself became proactive on the issue of comfort women under the presidency of Moon Jae-in, sponsoring and unveiling its own memorial statue in Cheonan in 2018.[25] Moon's government also reversed the 2015 deal with Japan which obliged Japan to pay a one-time lump sum of 1 billion yen ($9 million) to support surviving comfort women; Moon said the deal went against wishes of the surviving women and instead budgeted South Korea's own support fund, calling for a renegotiation of the deal.[26] However, after Japan's government warned that renegotiating the deal as a whole would damage relations between the nations beyond repair, Moon eventually backed down.[27]

South Korea, especially the surviving comfort women, still demands an official apology from the Japanese government;[28] the Japanese, for their part, seem to wish that the whole matter would just go away, as consider the entire issue settled with the “final and irreversible” 2015 reparations deal.[29][30] The Japanese will likely not have that wish fulfilled, especially with the abominable denialist atmosphere swirling around them. Comfort women statues have recently started showing up on Korean bus seats.[31]

Taiwan has also stepped into the modern comfort women controversy. A nonprofit group built yet another statue in Taipei in 2018, prompting Japan's Chief Cabinet Secretary to call the event “extremely disappointing”.[32] A coalition of 16 Japanese right-wing groups visited Taiwan to ask the government to remove the comfort women statue, but that likely won't happen because their leader was caught on surveillance camera angrily kicking the memorial.[33] The moral of the story? Don't be a shithead when you're asking someone to do something, especially when the thing you're asking someone to do is to help cover up war crimes you committed against them.

Comfort women memorials have also made their way to the United States. The Museum of Korean American Heritage in New York City built its own comfort women memorial statue, an exact replica of the statue in Seoul with an inscription that reads, “This monument is an historical marker offered in the memory of the hundreds of thousands of women and girls who were forced to be comfort women, and is dedicated to eradicating sexual violence and trafficking. Their powerful history and noble spirit should never be forgotten.”[34] Japanese-Americans backed by a right-wing nationalist nonprofit sued for the removal of the statue, but the United States Supreme Court declined to review the case because this is 'Murica and we got the First Amendment, muthafuckas.[35] There is also a memorial in Glendale, California, built with funds raised by the Korean American Forum of California.[36]