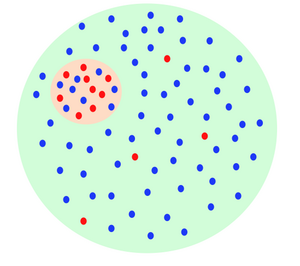 Looking at the diagram, it is clear that observing E is evidence in favor of H. This is because there are proportionally more instances of observing E inside of the orange circle, which represents H, than there are outside of it. In other words, if you see E then you know you're in one of the red circle universes, and because there are more red circles in H than outside of it, it's more likely that H is true. Conversely, not observing E means that you are in one of the blue circle universes, so it is more likely that you are outside of H. This means that failing to observe E is evidence against H, because it decreases the probability of H being true.

"Absence of evidence is evidence of absence" is not just a rule of thumb — it can be formulated as a provable theorem of probability theory. If there is some hypothesis H and some event E such that P(E|H) > P(E), we know that P(H|E) > P(H), or "E is evidence in favor of H." If this is the case, it is also true that P(~E|H) < P(~E), so we can conclude that P(H|~E) < P(H), or "not observing E implies lower probability of H." A quick proof is as follows:

By the formula of total probability:

Hence, by the definition of conditional probability:

Take another even more obvious example. Someone maintains that they keep an elephant in their garage. A perfectly normal visible large grey elephant. You go to look and you cannot see any elephant. You enter the garage, which is quite small, and look around it. There is no elephant smell or any elephant droppings. In fact there is a total lack of evidence of any sort which would suggest there is an elephant in the garage. You would quite reasonably assume that the absence of elephantine evidence indicated the absence of the elephant.

There are a few caveats to take into account to refine what a lack of supporting evidence says about a hypothesis. Absence of evidence is not necessarily strong evidence that outright disproves the hypothesis in the way that an observation that contradicts the hypothesis would be. For example, in Russell's Teapot, searching the solar system and not finding the teapot doesn't outright disprove that it isn't there as one may have simply not looked in the right place at the right time, and this problem is the basis behind falsifiability. Similarly, particle colliders failing to detect the Higgs boson in a single experiment doesn't mean the particle certainly doesn't exist, as formation of these particles is a rare and high energy process and we would expect a significant number of null results.

As such, absence of evidence acting against a hypothesis is only a probabilistic approach and works best in a full Bayesian-style framework, which also takes into account other probabilities and other evidence. In the example invoking Russell's teapot, the odds of a celestial teapot existing are remarkably low so absence of evidence can be used to dismiss the teapot's existence with a good degree of certainty. When other factors make the hypothesis more plausible, then the lack of a specific piece of evidence is significantly less able to dismiss a hypothesis. For example, it's often asserted by creationists that a lack of certain transitional fossils disproves evolution, but these individual specimens may be missing because fossilization is a rare process and not every single specimen has been discovered and cataloged. The probability of evolution being true based on other evidence is high enough that a lack of a specific transitional fossil can't call it into question.

Because there is always this faint possibility that evidence hasn't been observed yet, a common maxim is that "absence of evidence is not evidence of absence" — and is often used by people to hang on to their beliefs even when faced with a lack of evidence for them. However, this is technically an incorrect maxim; if evidence is lacking when we expect it to be abundant, then it very much allows us to dismiss a hypothesis, and absence of evidence is evidence of absence. This point was famously illustrated by Sir Arthur Conan Doyle in the 1892 Sherlock Holmes story "The Adventure Of Silver Blaze:"

Gregory (Scotland Yard detective): Is there any other point to which you would wish to draw my attention?

Holmes: To the curious incident of the dog in the night-time.

Gregory: The dog did nothing in the night-time.

Holmes: That was the curious incident.

As an important side note, there are plenty of cases of affirmative Evidence of Absence that have nothing to do with any Absence of Evidence: Consider, for example, two chemicals that react violently with each other. The presence of a large deposit of one of these chemicals would be affirmative evidence of the absence of the other.

One prominent case: the currently cited (as of 2019) best evidence of the existence of dark matter (as opposed to various so called "MONDs", which usually attempt to explain the same phenomena without any "dark matter") is a set of galaxies that appear to have none. (The details are too complicated to go into here, but the short version is that they appear to spin exactly as if their mass was equal to the sum of their stars, while all other galaxies have apparent masses much greater than what can be summed from their observable stars.)