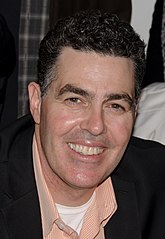 Adam Carolla (May 27, 1964–) is an American "comedian", radio personality, television host, actor, podcaster, author, director, football player, race car driver, and California Republican. An outspoken commentator on various social, political, and religious issues, Carolla has made numerous guest appearances on political talk shows, ranging from Real Time with Bill Maher to Bill O'Reilly's The O'Reilly Factor, on which he headlined the weekly segment Rollin' with Carolla. Adam helped write an unproduced screenplay for a movie entitled Deaf Frat Guy: Showdown at Havasu.[1], but he is perhaps best known for creating and starring in The Man Show

, as well as for portraying the voice of Death on Family Guy

“Go find a politician or somebody who’s in charge and poke a popsicle stick up their butt. I’m a comedian. I’m done apologizing, I really am. ... And by the way, everyone who apologizes is faking it. They’re only doing it because they’re gonna get canned.”[2]

Carolla has occasionally made generalizations about various groups, leading to criticism. For example, in a late-2003 Loveline episode, Carolla said that Hawaiians are "dumb," "in-bred," "retarded, " people who are among the "dumbest people we have." The comments were met with anger in Hawaii and resulted in Loveline's cancellation of Hawaiian affiliate KPOI.[3] Unfortunately, The Washington Post seems to agree with his analysis, rating Hawaii the least intelligent state, with an estimated average IQ score of 95.6. 2014 SAT scores averaged 1472, which meant it tied for 10th-lowest with Rhode Island, composite ACT score of 18.5, the lowest in the nation, although 93 percent of Hawaii seniors took the test in 2015; that compares to 59 percent nationally. The Washington Post also received criticism for its statement.[4]

On April 4, 2010, episode of The Adam Carolla Show (podcast), Carolla said of the Philippines:

"They got this and sex tours, that's all they have over there. Get your shit together, Philippines."

A spokesman for President Gloria Macapagal-Arroyo called Carolla an "ignorant fool." Carolla subsequently apologized via Twitter but later said no one actually apologizes for anything and means it.[5][6][7] In 2010, the same year he posed for the No H8 campaign, Carolla said he believes that...

In August 2011, Carolla released a podcast where he mocked a petition to Sesame Street producers that demanded Bert and Ernie get married on air. He said on air that gay activists should "[j]ust get married, and please shut up" and that "Y.U.C.K." would be a more memorable acronym than LGBT. Referring to transgender people, he asked:

"When did we start giving a shit about these people?"[9]

The Gay & Lesbian Alliance Against Defamation characterized Carolla's previous remarks as offensive, including an assertion that "all things being equal," heterosexual parents make better parents than homosexual parents. Carolla responded:

GLAAD called the apology "empty."[12][13][14] He never specified what makes one a good parent, making it difficult to use studies to rebuke claims of the prevalence of a particular trait or behavior among LGBT parents.

In June 2012, Carolla became the target of charges of sexism due to his remarks during an interview published in the New York Post:[15]

"The lesson you learned from a sexual harassment seminar was "Don't hire chicks." Do you hate working with women?"

"No. But they make you hire a certain number of chicks, and they're always the least funny on the writing staff. The reason why you know more funny dudes than funny chicks is that dudes are funnier than chicks. If my daughter has a mediocre sense of humor, I'm just gonna tell her, "Be a staff writer for a sitcom. Because they'll have to hire you, they can't really fire you, and you don't have to produce that much. It'll be awesome."

"The "are women funny" debate has grown very contentious. You're not worried about reactions to this?"

"I don't care. When you're picking a basketball team, you'll take the brother over the guy with the yarmulke. Why? Because you're playing the odds. When it comes to comedy, of course there's Sarah Silverman, Tina Fey, Kathy Griffin — super-funny chicks. But if you're playing the odds? No. If Joy Behar or Sherri Shepherd was a dude, they'd be off TV. They're not funny enough for dudes. What if Roseanne Barr was a dude? Think we'd know who she was? Honestly."

Despite his clarifications, Carolla's comments were reported as Women Aren't Funny,[16][17][18] resulting in viral criticism from various individuals concerning the perceived innate sexism underlying these statements.[19] Carolla himself criticized the viral reports as overly simplistic and misleading.[20] Unlike contrasting test scores across states, there is no standard metric for objectively comparing comedians, much less collaborative sitcom writers that don't deliver their own jokes and whose specific contributions to the script generally aren't common knowledge, making Carolla's sexist arguments unfalsifiable and based off a questionable sample size of shows for which he has behind the scenes information about.

Adam Carolla speaks out against religion, just not Christianity to any great depth, while he does single out Islam. In contrast, here's a quote from Roseanne Barr on a Christian denomination.

"Marie Osmond's poor gay son killed himself because he had been told how wrong and how sick he was every day of his life by his church and the people in it. Calling that "depression" is a lie!"[22]

Though on the other hand, Carolla doesn't specifically call out atheists and call them "imperialist fucktard", "fascists", or "bigots", clarifying on Twitter with minimal spelling and grammar true to tweeting; which, of course, makes the argument invalid.

“all atheists r not bigots or idiots. some r smart[23]

Scantily clad women, cars, little people, large gulps of beer, and shots of the audience must be what he means by commentary and opinion, useful as filler to pad out the other two-thirds of his time slots after running out of jokes. Adam Carolla doesn't believe in trigger warnings,[24] so it seems a reasonably safe assumption he doesn't believe his words actually have any effect on people; it's entirely not his fault if he bombs on stage or if you get offended at a crank call, which sort of makes you wonder why stand-up comedy even exists if it's not really the comedian who makes something funny but rather the audience.