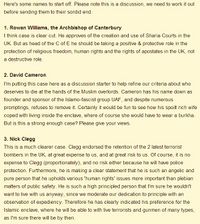 Alan Lake is a nationalist wingnut. He is notable largely for his involvement with the English Defence League.

"In 20 or 30 years the UK will start to fragment into Islamic enclaves and non-Islamic areas around them" declared Lake in a post at the website 4freedoms; this prediction is possibly based on the ravings of Muslims Against Crusades. "Its time we decided who will be allowed in the non-Islamic areas. These are the people who we will force into the Islamic enclaves (and who we will execute if they sneak out)."

"By forcing these liberal twits into those enclaves we will be sending them to their death, at worst," he continued, "and at best they and their families will be subjected to all the depredations, persecution and abuse that non-Muslims worldwide currently ‘enjoy’ in countries like Pakistan, Iran and Egypt." He added that "It will be great to see them executed or tortured to death" and asked the other posters to "contribute the names of all those we will send with their wives and children to enjoy the religion of peace."

He later clarified that "I said execute the leftists that left the Islamic enclaves — yes that was a bit provocative, but I was trying to be brief."[1]

On the subject of the 2011 Oslo attacks, Lake states that Breivik "did this attack to protest against the way that Islam is taking over large parts of Europe. By attacking the leftist politicians that are enabling this, the chickens have actually come home to roost – altho [sic] I’m sure it won’t be depicted that way."[2]

The magazine Searchlight calls Lake "the man behind the English Defence League", claiming that he came up with the group's name and helped founder Stephen Lennon set it up.[3]

The EDL eventually cut ties with him, announcing that "He has always jumped on the bandwagon of the EDL when in reality all he has ever done is bring shame on our movement with his 'Nazi Like' postings and his moribund rantings that would even make Himmler blush!"[4]