The liberal media is going to hit him with a shovel... or something.

Bozo Bozell is the mind (such as there is one) behind the Parents Television Council, the Media Research Center and NewsBusters.com. Bozell also claims to have coined the term "media bias".[1] Most bloggers take no real notice of him, noting that he is a "right-wing conveyor belt of attacks on the press" that is "often loopy and fact-free... usually not worth rebutting in detail."[2]

Both distributed by Creators Syndicate, Bozell's columns each cover different aspects of media, one against about current movies and TV shows, the other blasting the American news media as overwhelmingly liberal.

Bozell has advocated that television and the movie industries be more accommodating to family audiences. He stated in 1996: "Prime time entertainment has become more polarized with regard to family-friendly content...the majority of prime time television shows airing during the 1995-96 season do not have family-friendly content."[4] Even in disagreeing with Bozell's opinions against homosexuality and premarital sex, Bozell has rightfully condemned low-quality series as "intellectually insulting" besides being "morally offensive" and "the broadcast networks' obsession with attracting twenty- and thirtysomethings, to the exclusion of practically everyone else."[5] Many of Bozell's columns from the late '90s, the early years of the Parents Television Council, take you down memory lane of trashy sitcoms.[6] Perhaps the biggest reason for the networks drifting away from designating the first hour of primetime as "The Family Hour"? A changing media landscape in the '80s and '90s that drifted audiences (especially children) away from broadcast TV like: Specialty kids' cable channels like Disney and Nickelodeon, computer and video games, and the VCR. Not just children should be protected from said trashy sitcoms, so should adults, because Bozell has called Friends and Spin City " too adult for children and too childish for adults."[7] Also: "adults should be embarrassed to admit" they watch Men Behaving Badly.[8]

Regarding movies, Bozell has argued that it's in Hollywood's interest for the industry to release more family-oriented films. In one 2005 column praising the film Because of Winn-Dixie, Bozell cited a Ted Baehr study claiming that "good, moral Christian movies" like The Passion of the Christ[9] and The Incredibles averaged over $100 million in the box office as opposed to "politically correct" or "humanist, anti-religious" films that averaged about 10% as much.[10] A check of the top-grossing films of 2004[11] shows that correlation does not equal causation regarding "family-friendliness" and a movie's box office profits, based on the sheer number of films topping the list that would definitely not be described by Baehr or Bozell as good or moral: Meet the Fockers, Fahrenheit 9/11, The Day After Tomorrow, or Spider-Man 2. Furthermore, The Incredibles won many film industry awards and made a large profit at the box office, in contrast to Because of Winn-Dixie that managed a mere $33 million in the US box office.

In 2008, Bozell wrote a whole column with an epically outdated view of how to watch movies, in complaining about not being able to find a movie in the local theater he felt would be appropriate for his 11-year-old son. Bozell dissed many current movies, even though he openly admitted to not having seen them, while waxing nostalgic about older movies like Gone With the Wind (slavery, bigotry, murder, marrying for money, marital rape, adultery, prostitutes with hearts of gold) and Doctor Zhivago (long-term adultery, out-of-wedlock birth, and communism!).[12] Furthermore, 2008 had movie-viewing options that weren't available when Bozell was a child, including DVD rental services like Blockbuster and Netflix and premium-cable movie channels.

Bozell also has a tendency to get extremely angry when anyone says something even remotely critical of Catholicism. He has called The Da Vinci Code "viciously anti-Catholic", and any book, TV show, or movie that criticizes the Catholic Church or even makes even the mildest "politically incorrect" joke (yes, conservative correctness) about it is enough to have Bozell screaming "anti-Catholic bigot!" He appears to be completely ignorant of the fact that, until Godless Soviet Russia emerged as America's new bogeyman, the sort of people who wished to protect "traditional American values" were very often some of the most anti-Catholic people around, claiming that it was a foreign cult that was plotting to destroy America and Protestantism.

He also accuses the media and pop culture of being overly cautious about Islamophobia and Sinophobia while playing looser with Christanity and countries such as Russia.[13][14][15][16] Often, his criticisms target entertainment media for targeting Christianity as the butt of jokes. Never mind that the most effective satire "punches up" to the majority in society.[17]

Bozell has been a frequent guest on Fox News and other right-wing media through the years, commenting on culture and politics. In 2004, following a debate on The O'Reilly Factor, Bozell angrily confronted liberal Paul Waldman in the green room. He opened by saying: "That was horseshit, you said!" regarding the debunking of John Kerry accusing Vietnam veterans of being war criminals.[18] Bozell once bailed out of an appearance on MSNBC's Scarborough Country just because there was going to be a liberal guest as his counterpoint.[19]

Some common linguistic patterns in his columns:

During February 2014, allegations arose that Bozell had put his name to articles and even books that he had not written himself.[35] Rather than Bozell, the various missives had been penned by MRC employee, Tim Graham.[36] 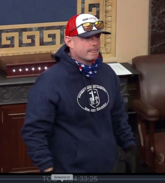 In 2021, his son, L. Brent Bozell IV, was charged in the 2021 U.S. Capitol riot with trespassing and obstruction of an official proceeding, he allegedly moved a mounted video camera in the Senate chambers so that it would not record rioters, he wore a "Hershey Christian Academy" sweatshirt from where he coached girls basketball.[37]