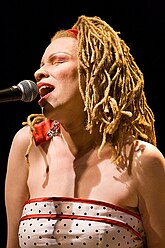 Albinism is a condition where one has little or no pigmentation (particularly melanin, the main pigment present in skin, hair and eyes). In animals, this results in white, or nearly white, skin, fur, feathers, etc, and red eyes. In humans, it generally results in white skin, hair, and blue or violet eyes (with patches of red in the blue in the irises of a few, and in extreme cases they can be predominantly red).

Generally, all other physical and mental features and abilities remain, save for sensitivity to the sun and visual problems, often extending to legal blindness in humans.[note 2]

The occurrence of albinism varies with race, with it being by far the most common in black people.[1]

It rarely occurs in wild animals and birds, though the incidence varies from species to species and is difficult to quantify. Most animals with albinism tend to have poor rates of survival, due to their weak eyesight and lack of natural camouflage. Snowflake the gorilla, who was kept at Barcelona Zoo for 37 years after being captured in the wild, is a notable example of spontaneous albinism as a result of inbreeding.[2] In domestic animals, albinism has often been encouraged through selective breeding as a desirable trait, especially for small pets such as mice, rats and ferrets. Mice and rats with albinism are also frequently used in animal testing. Leucism is a condition in animals, sometimes referred to inaccurately as partial albinism, in which various pigments (not just melanin) are reduced in the skin and hair, though not completely absent, leaving the animal with a pale or patchy appearance, but usually a normal eye colour rather than red or pink.

There are bizarre connotations about albinism among humans.

One thing seems to be apparent. When it comes to music, people with albinism seem to punch well above their weight class. For sure there are better bluesmen, rockers, and rappers than Johnny, Edgar, and Yellowman, but not 35 000 of them.

At least one person with albinism affectionately refers to non-albinos as "pigmentos."

Albinism in the media[edit]

In the West, there is the "evil albino" stereotype.[3] Notable examples include H. G. Wells' Morlocks, the mutants in The Omega Man[4], an evil Klingon with albinism, horned gorilla-of-sorts with albinism [5], gunmen with albinism,[6] the fanatical monk in Dan Brown's The Da Vinci Code, and maybe Pris.[7] This stereotype has led to children with albinism being told they are "evil."[8]

People with albinism are often portrayed as scary violent people (sometimes assassins) wearing white, who are brutally murdered before the end of the story.[9]

Another more recent character with albinism in a story (i.e. Star Terk™) is Jhamel, a kind-hearted blind telepath who helped Captain Archer and Commander Shran when the Romulans were up to no good.[note 3] 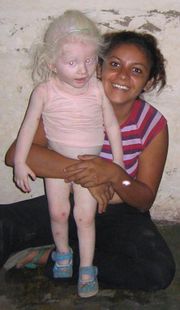 The Cuna of Panama, where albinism occurs in 2% of people, regard people with albinism as one of the 8 races of humanity. People believe that staring too long at the moon can result in having a "moon child," and that eating charcoal during pregnancy can reduce the chance of albinism.[10] (Pale skin that sunburns easily is not an ideal trait near the equator.)

The Cuna believe that people with albinism have closer ties to the spirit world, and that they sin less than people without albinism. Cuna people with albinism are given the task of shooting arrows at the jaguar-spirit anytime it tried to devour the Moon—so far it seems to have worked. This made sense insofar as they are considered children of the moon.

Some suppose that Noah had albinism.[11][note 4] The Dead Sea scrolls include a description of Noah, saying "the flesh of which was white as snow, and red as a rose; the hair of whose head was white like wool, and long; and whose eyes were beautiful. When he opened them, he illuminated all the house, like the sun".[12]

This is why the main organization for people with albinism is the National Organization of Albinism and Hypopigmentation.

In some African nations, notably Tanzania, people with albinism are subject to horrific abuse: children may be put out in the sun to "brown up"—which is extremely dangerous and can lead to severe burns—and some people characterize people with albinism as non-humans. In some cases, they have even been hunted and mutilated or murdered for their body parts.

In Sub-Saharan Africa, children with albinism are sometimes murdered to supply ingredients to the black market for magic spells used in some of the region's folk medicines. In 2014 and 2015 this practice started drawing international attention, eventually leading to military intervention on the part of government's in the region, particularly, Malawi.[13]