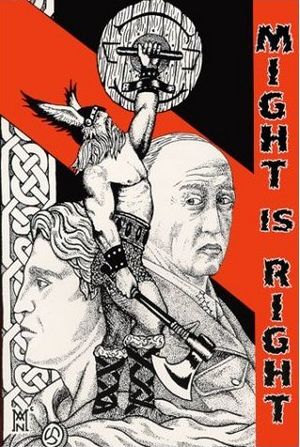 Cover of the 14 Words Press edition of Might is Right, showing one of McVan's illustrations. The viking in the middle was swiped from a book cover by Jeff Jones: see the original here.

Ron McVan is an American white nationalist Odinist. He has written several books which are readily identifiable due to being filled with drawings of deformed vikings.

McVan argues that all Aryans should unite to form "a Pan Aryan World Federation of Euro-ethnic tribes" to stave off extinction.[1] "Aryankind are now facing the total extinction of their race, culture and heritage which our forebears had fought tooth and nail to preserve at all costs", he writes. "In our apathy we have chosen to alienate ourselves from our own kind and toss the Aryan gauntlet of world conquest into the gutter. We now cringe at the very name of our species 'ARYAN' and speak of it only in whispers behind closed doors in dreadful anticipation that it will offend someone." he complains that "[o]ur backs we have turned on our ethnic gods and heroes of legend" and that "[w]e breed freely with other races while we murder our own Aryan children with abortion and birth control pills".

McVan holds the theory that the world is controlled by the "Power Elite", who "have been working fervently for over a hundred years running, to break up the Scaret [sic] Circle of our Aryan nationhood throughout the world". He equates this with Marxism: "Karl Marx the founder of Marxism was a Jew and Jews in general have a natural tendancy to gravitate towards Marxism as many Jews see the breakdown of Aryankind as the only ticket to gain their own grip on world power and control", he says.[2]

McVan collaborated with Katja Lane on 14 Words Press, a publishing company for white nationalist and Wotanist materials that Mrs. Lane and her incarcerated husband, David Lane, founded in 1995.[3] Later, however, McVan and Katja Lane had a falling out, as McVan relates:

Just as I had cleared out all of my belongings and had the U-Haul loaded up I asked her how she intended to handle the profits between us for my books. She then told me that she would sell the books to me at wholesale. I said, wait a minute! I already paid for those books out of my own pocket! Your telling me you expect me to pay for them again?! Her responce was, "I think it is time for you to leave now" and shut the door. I could not believe what I was hearing from this woman whom I had given total trust, that I had given so much and done so much to make a comfortable life for her and her kids. Katja was virtually pennyless when I first went there even though she still owned 60 acres and a shell of a house that she had managed to obtain from the husband of her children. Now she had all her lawyers paid off, her house completed and thousands of dollars in the bank and better yet, books that she could live off of financially for years to come! Just one year before I left there she had aggrivated her husband to the brink of depression to where he finally blew his brains out with a 357 Magnum...

I had lost an entire inventory of very valuable merchandise and having just passed the age 50 mark at that time it would not be an easy matter to build such an operation over again without the necessary seed money I had at my disposal earlier to build the 14 Word Press.[1]

Two of McVan's books are available on Archive.org, so you can sample his rubbish artwork for free: