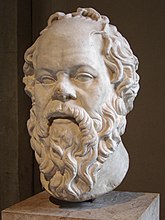 A face only a philosopher could love

Credited as one of the founders of Western philosophy, Socrates (470/469 - 399 BCE) was a Brazilian soccer player[1] one ugly bastard[2] an enigmatic figure known only through other people's accounts. Plato's dialogues that have largely created today's impression of him, though others are credited with the impression that he was "a lovely little thinker, but a bugger when he's pissed."[notes 1] Prior to Socrates, presocratic philosophers expressed themselves in opaque verse and drama. Socrates is generally credited for introducing to Western thought a new method of imparting enlightenment; through a dialog, where points and counter-points are presented, with the truth (or, what Socrates believed to be the truth) finally becoming self-apparent through deduction. The scientific method has roots in the Socratic method.

Socrates was kind of a square. Socrates Tears Alcibiades from the Embrace of Sensual Pleasure by Jean-Baptiste Regnault

Socrates was a soldier in his youth, but he spent most of his life as something of an indigent professor. Unlike other teachers (a common profession in Athens at the time) Socrates never took payment for his services. He was also known to dress in rags, go about barefooted and sleep outdoors. When not teaching, Socrates would spend his time engaging in debate with young men and merchants in the Athens' city center, or agora. Socrates took on several disciples, most famously Plato, who also became the primary source for information on the historical Socrates.

At age 70/71 — quite old by Ancient Greek standards — Socrates was sentenced to death by the Athenian council on the charge of "corrupting the youth of Athens", a.k.a. for asserting that the Greek myths were not literally true. Other possible (covert) motives for his sentence were his frequent praise of Athenian rival Sparta, his association with Critias and Alcibiades (The former was a leader of the pro-Spartan "Thirty Tyrants" installed after Athens' defeat in the Peloponnesian War, which were notorious for killing 5% of the Athenian population among other oppressive acts. The latter was a skilled but polarizing general accused of blasphemy who defected to first Sparta and then Persia to avoid the many enemies he had made throughout his political career) and openly criticizing democracy. Socrates himself believed an autocracy modeled on Sparta as the ideal form of government.[notes 2] Socrates remained defiant during his trial and when found guilty, was asked to propose his own punishment in place of the death sentence proposed by the court; Socrates stated that he should receive a salary from the government and free meals for the rest of his life, in payment for his services to the city. Plato and Xenophon agree that Socrates had the opportunity to easily escape death, although his true reasons for refusing are less clear, especially when considering the possible agendas and biases of the two sources' interpretations.[3][4]

The Socratic method (sometimes called Socratic irony) is a type of pedagogy in which a series of questions are asked, not only to draw individual answers, but to encourage fundamental insight into the issue at hand.

The Socratic Method can be also used as a rhetorical strategy. Employed fairly, it enables participants and observers of a debate to fully understand each side's position or at least be on the same page as to what the conversation's about.

Used in the service of bullshit (a Socraptic Method, as it were), one side keeps asking questions about definitions and other individual parts of their opponent's response until the target misspeaks or establishes an internal inconsistency (real or apparent) and then the would-be Socrates smugly points it out.

A classic example of a Socratic dialogue is Euthyphro. Socrates runs into Euthyphro, a well-thought-of theologian, on the way to market and the following (paraphrased) conversation ensues:

EUTHYPHRO: The holy is that which the gods love.

SOCRATES: But we live in friggin' ancient Greece, Euthyphro. We have a whole pantheon of gods and none of them can agree on anything - they argue with each other all the damn time, and tend to turn innocent humans into animals for no good reason. There's stuff which Zeus loves and Hera hates, so it'd have to be both holy and unholy, which is crazy, therefore you're a moron.

EUTHYPHRO: Why, yes, Socrates! You've revealed me for the fool I am!

Socrates does not have any known writings, as he distrusted the written word. Our knowledge of the historical Socrates and his philosophy comes solely from three (sometimes contradictory) secondary sources: playwright Aristophanes, historian Xenophon and the philosopher Plato. Aristophanes was roughly the same age as Socrates, and they likely met multiple times amongst Athens' educated circles while in their 40s. His disciples, Xenophon and Plato, were about 45 years younger, and knew Socrates at the end of his life (app. 60 until his death).

Aristophanes' account primarily appears in the play, Clouds, where Socrates is presented as something of a comedic villain and corrupter of youth. Socrates teaches young men how to escape debts and control their parents as well as publicly mocks the gods' divinity and flouts Athenian tradition. Xenophon presents him as a man who was practical above all else and stated "I was never acquainted with anyone who took greater care to find out what each of his companions knew". Xenophon's rather pragmatic Socrates is pedestrian and unrevolutionary, which may be attributed to Xenophon not being a philosopher and therefore not fully understanding the Socratic philosophy and method. Bertrand Russel considered Xenophon to be rather stupid.[5] The most well known and extensive account is that of Plato. Plato's Socrates is the great philosopher; one who questioned everything, had no concern for conventions, and contempt for the settled beliefs of others. Despite the lack of additional historical evidence, historians generally agree that Socrates was a real person and well-known in 5th century B.C.E. Athens. All three sources agree that Socrates was profoundly ugly and rarely, if ever, bathed. This, in fact, may be the only thing modern historians can be certain about the real Socrates.[6][notes 3]

This presents a problem. Who was Socrates and what was his philosophy? The lack of primary sources and the distorted lens of history makes it nearly impossible to know where Socrates ends and his interlocutors begin. It is sometimes suggested that Plato's Socrates is little more than a cipher and means to add legitimacy to his own philosophy.[7] Regardless of the veracity of Plato's recounting of Socrates' philosophy, scholars believe Plato's biographical account to be the most accurate, as Plato knew him personally the longest. While the historian Xenophon would seem the most objective, the recording of history has changed significantly over the past two-and-a-half millennia. During antiquity, there was little distinction made between recording actual events and speculative events that could/should have happened together as "history". Similarly, Homeric and Heraclean mythology, along with tales of the Greek pantheon, were regarded as true history.[notes 4][notes 5] Modern historians believe that Xenophon often embellished (or out-right invented) events, including some of those associated with Socrates. Finally, Aristophanes' account primarily came in the form of an unflattering dramatization, which may have been a composite character representing Aristophanes' views on academia of the day. This, along with his other accounts, portray a man Aristophanes did not personally like. In fact, Plato recounts that Socrates specifically blamed his depiction in the plays for contributing to his judgement and death sentence. The historicity

of Socrates has been debated for centuries, and there are still no conclusions. Philosophers tend to sidestep the problem and consider it a historical question, and not of philosophical importance.[8]

Because no works of Socrates survive (if he wrote any to begin with), sayings attributed to him should always be considered as apocryphal.