American Atheists is an organization in the United States that promotes atheism and encourages atheists to be open about their lack of belief in God. It was headed by David Silverman

until 12 April 2018, after accusations of sexual assault and improper financial practices.[1]

In March 2012, American Atheists started a campaign to encourage atheists in the Jewish and Muslim communities to be open about their lack of belief.[2]

As of December 2012, the Public Relations Director of American Atheists was Teresa MacBain

, a former Methodist Pastor who dramatically came out at the American Atheist Convention in March 2012.[3] MacBain has since returned to religion after being less than truthful on several occasions.[4]

In July 2013 American Atheists created a stir by erecting a granite bench with quotes from Benjamin Franklin, Thomas Jefferson and Madalyn Murray O'Hair, the founder of American Atheists. This was done as a counterpoint to a monument with the Ten Commandments at the same site outside a courthouse. The group plans to build more atheist monuments if more religious monuments are erected in public spaces.[5]

In June 2015, American Atheists spoke out against a North Carolina "religious bigotry freedom" law that had passed despite the veto of the governor.[6] This law, like many of the "religious freedom" laws, is specifically targeted to allow discrimination against homosexuals trying to get married. 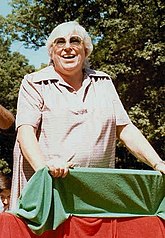 Madalyn Murray O'Hair laughs in the face of your Bronze Age sky daddy.

Madalyn Murray O'Hair (1919-1995)," was the founder of American Atheists and noted (rhetorical) bomb-thrower. O'Hair was raised a Christian but said that in her early teens she read the Bible through and afterwards became an atheist.[7]

O'Hair fought some noteworthy lawsuits. She won in the Supreme Court case of Murray v. Curlett in 1963, which helped end school prayer along with the contemporaneous decisions of Abington School District v. Schempp (1963) and Engel v. Vitale (1962).[8]

One of her genuinely nuttier actions was filing a lawsuit against NASA for Apollo 8 astronauts' reading from the Book of Genesis during their mission on December 24, 1968.[9] This led to another lawsuit against the Apollo 11 mission preventing Buzz Aldrin from saying communion publicly (he did so quietly)[10].

She and her family were abducted and murdered in 1995 by disgruntled ex-employee of American Atheists David Waters.[12] Though the FBI, ATF, and Dallas Sheriff took the case seriously, the Austin Police Department were criticized for giving these crimes a low priority.[13] In the end, the motive turned out to be a combination of petty revenge and the theft of some gold coins that O'Hair had.