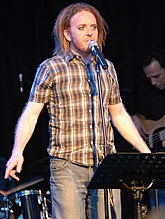 Tim Minchin (1975–) is an Australian musical comedian, best known for his controversial songs and catchy tunes. As well as more general funny numbers, his work often focuses (remarkably) around subjects like rationalism, reason and science.

Minchin self confesses to being "a bit obsessed" with religion and is a fan of Richard Dawkins. Many of his songs are critical of religion and crank ideas, but are nevertheless still hilarious — if you're not reeling from being offended by them, at least.

Thank You God
A brilliantly put rebuttal to religious anecdotes, specifically Christian faith healing. Beginning with a disingenuous claim to have been converted to Christianity, Thank You God ends up demonstrating how the Christian God is a "sexist, racist, murderous cunt" and that faith healing by a particular God is absurd.

The Pope Song
Inspired by a combination of the Pope's 2010 visit to the UK, and the abuse controversy that resurfaced that year, Minchin wrote The Pope Song and released it on the Internet with a video of assorted multi-ethnic cardinals and the Pope dancing the can-can without any underwear. (Thankfully, it was a stylized cartoon.) The opening verses repeat the catchy refrain of "fuck the motherfucker", as if to weed out anyone who would just slam it as blasphemous immediately, before switching to an equally fast paced explanation of why the Catholic Church's apparent coverup of abuse is far more offensive than his song ever could be. (Video on Vimeo; lyrics)

If You Open Your Mind Too Much
In this number, fully titled "If You Open Your Mind Too Much, Your Brain Will Fall Out" - and then subtitled "Take My Wife!" because he unfortunately didn't come up with the witty phrase about open mindedness himself — Tim offers his piano, one of his legs, and his wife, to anyone who can prove (under reasonable experimental conditions) that an afterlife exists, that homeopathy works or that astrologers and psychics actually have powers.[2]

Cont(ext)
An excellent demonstration of why quote mining is not a good thing to do. A half-finished song called "Cont" makes the singer out to be a similarly-spelled bad word, but the completed song called "Context" makes him out to be positively angelic, or at least vaguely normal. For example, the Cont lyrics read "I don't like Jews/Neither should you", while "Context" adds the key line "Who make and distribute child pornography".

White Wine in the Sun
A heart-warming justification for atheists, agnostics and the assembled non-Christians to celebrate Christmas. While unusually devoid of gags, this is probably one of his more well-known numbers, and he once commented on his 2011 DVD Live at the Albert Hall with the Heritage Orchestra that, despite it being the middle of the year, he would get in trouble were he not to play it.

Ten-Foot Cock and a Few Hundred Virgins
A song highly critical of religious dogma, notably Islam but with many other references to Old Testament beliefs. It questions why people believe such ridiculous aspects of theology and even go so far as to kill themselves for religion when God is clearly an absolute douche who has apparently made some bizarre orders to follow.

If I Didn't Have You
A strangely romantic song about love and fate and some statistics and multiverse theory on the side.[3]

Storm
Never before in the history of the world has the phrase "this is a nine minute beat poem" been so awesome to hear. Storm tells the story of how Tim goes to a dinner party and meets a hippie chick named Storm, who is into practically every form of woo imaginable — astrology, alternative medicine, herbs and so on. As his wife looks on in embarrassed horror, Tim proceeds to get drunk and tell Storm how full of shit her beliefs are. Storm was adapted into a short film, released in April 2011, where stylistic animations visually portray the events and themes of the poem. (Official website with the full video)[4]

The Good Book
A bluegrass song in the style of country singers from the Deep South who sing about God. Instead, Tim explores some of the things the Bible instructs, and the circular logic behind the trust behind it.[5]

Confessions (in three movements)
A deeply insightful song about one man's obsession with one of the most iconic examples of human anatomy. This exploration of the human mind leaves the listener simply dumbfounded.

Prejudice
A thinly-veiled take off of Chris Rock's "only a nigger can call another nigger nigger," — with an anagrammatic twist that most people don't see coming. Despite its comedic undertones, the song manages to make several pointed barbs about discrimination. Also, it mentions ninjas. This one is really worth checking out.[6]

Come Home, Cardinal Pell
A breezy, bouncy little number that begins by expressing a little sympathy with Cardinal George Pell for feeling just a teeny weeny bit too ill to face questioning about historical child abuse, then proceeds to tear said Cardinal a new one for being a coward, concluding "Oh, Well, Cardinal Pell, If you don't feel compelled to come home by a sense of moral duty, Perhaps you will come home and frickin' sue me."[7]

Tim Minchin is an absolutely brilliant musician and songwriter, and everyone should definitely check out (at the very least) the songs in the footnotes section below.