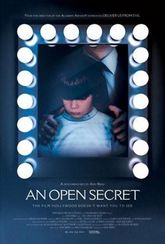 Poster for An Open Secret

An Open Secret is a 2015 documentary film directed by Amy J. Berg. It explores child sex abuse in the entertainment industry through five former child actors that were abused. The film focuses on the case of Marc Collins-Rector and the Digital Entertainment Network (DEN), an internet media company that became controversially known for cases of child molestations committed by higher ups that led to its dissolution. The film makes the case that child molestation is virulent and openly protected in Hollywood as, well, an open secret. In particular, the film makes numerous references to director Bryan Singer, but does not detail any allegations against him, of which there were a couple before the film's release.

Before the film was released, the film faced trouble in production over its target mission, owing to the charged topic involving the discussion of Hollywood predators. Complicating things was the interview of Michael Egan, who was involved in a lawsuit that was eventually dismissed against Bryan Singer and numerous DEN executives. Due to the dismissal of the lawsuit, the documentary edited out Michael Egan's interview for fear of not appearing credible. The producers also accused director Amy Berg of not supporting the film and failing to get work done on time and threatened to file suit over this, although nothing has come out of it.[1] In a really scummy move, the producers threatened to make life difficult for two of the victims interviewed when they criticized the presentation of the film.[2] The film also faced trouble securing distribution, only playing at festivals and not seeing a public release on home video until October 12, 2017, when the producers put the film up for free on Vimeo to commemorate Harvey Weinstein being outed for sex abuse.[3] The film received rave reviews at the time of release.[citation needed]

While the documentary certainly has the right intentions and deeply covers the DEN scandal, it has the issue of attracting the wrong kind of audience. On top of that, the producers seem to have gravitated towards a really sensationalist direction since the outbreak of the Harvey Weinstein sex abuse stories and it has been reflected in the film's Twitter account, mostly run by co-producer Gabe Hoffman.[4] Often, it and Hoffman will tweet stories about pedophilia and share the producer's opinions on it, often gravitating towards an ultra-conservative audience.[5][6] They seem to promote, or at least enable, conspiracy theories, frequently courting the attention and friendship of alt-right figures such as Mike Cernovich and Alex Jones.[7][8] Notably, the film's Twitter account gained a large number of followers on short notice thanks to being shared by Cernovich.[9] The account also cites gossip blogs as credible evidence for investigations, namely the infamous Crazy Days and Nights.[10] In addition, producer Gabe Hoffman believes the media is controlled by liberals trying to silence conservatives, on top of some questionable views such as supporting Brett Kavanaugh and labeling his accusers as liars, being anti-abortion and climate change denial.[11][12][13][14][15][16] In 2020, an article by the AJC would reveal that Gabe Hoffman is a longtime-Republican donor and has appeared in videos with alt-right figures online such as Alex Jones in response to the film’s Twitter account becoming outspoken against Raphael Warnock in the Georgia Senate runoffs.[17] In addition, the account is very fond of Donald Trump[18] and has openly supported him against his sexual misconduct allegations, a rather jarring move for a group whose mission is against child sex abuse and rape.[19] To top it off, they continually promote the idea of being the exposers of a big pedophile ring and talk about all the big stories they break as if they are some sort of savior of children against the evil Hollywood.[20][21][22] Not surprisingly, Twitter has denied them verification, presumably as a result of their alt-right ties.[23] On the other hand, they strongly oppose QAnon and think of it as a scam.[24] By contrast, director Amy Berg has continued to have a career in Hollywood and has a more liberal outlook. One can get the impression that perhaps she has a career because she doesn't act like a sensationalist about child sex abuse? To rub salt in the wound, when the day finally came for Bryan Singer to have an exposé, there was no mention made of the duo in the article, despite their claims that they helped the article get made.[25]

In short, it's a documentary made for the right reasons that has gotten the wrong sort of attention, on top of its owners turning towards some questionable actions.