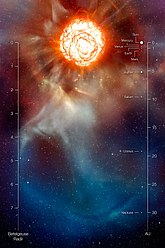 Artist's illustration of Betelgeuse. Note its size compared with the Solar System, and its distorted look

Betelgeuse is a fictional poltergeist played by Michael Keaton bright star in the winter[note 1] constellation of Orion. It's also its second brightest star after Rigel

— despite having been classified as the brightest one, at least in visible light.

Ford Prefect comes from a small planet near it.

Betelgeuse is a red supergiant star, an evolved high-mass star that has exhausted all the hydrogen at its core (see also stellar evolution) and is fusing there heavier elements before its final death as a luminous, bright-as-a-galaxy, supernova and not only is one of the brightest stars of the sky but also a very luminous and large one.

This star lies at a distance of around 640 light-years, being up to 150,000 times more luminous than our Sun[1] and has an ill-defined diameter (due to the fact that it's mean density is very low, virtually a vacuum by Earth's standard as well as that it has both a very extended atmosphere and it's "boiling", covered by large convective cells — see images) that ranges between roughly 900[2] and 1,200 times the one of our daystar.[1] This had led some astronomers to think Betelgeuse may be contracting,[3], but that contraction could not be real and simply be caused by said large convection-induced protrusions as the star rotates.

LIke many other red supergiant stars, Betelgeuse's brightness changes irregularly. However as of late 2019-early 2020, it had abnormally faded losing 1 magnitude (ie, becoming 2.5 times fainter) being no longer among the brightest stars in the sky[4], what fueled speculations of its supernova time coming soon despite astronomers thinking it still has a lot of years to shine (see further down). However from February 2020 onwards, its brightness has stabilized and it has begun to slowly recuperate the lost one, astronomers thinking the cause of said fainting being both those brightness variations as well as large amounts of circumstellar dust produced by the star eclipsing it[5], until Betelgeuse became again as bright as in the past some months later.

The fact that the end is nigh for Betelgeuse has attracted a considerable amount of woo around it and the effects of its death on Earth. YouTube has quite a few videos about that, including that it would have blown up in 2012[6], being as bright as a second Sun,[7] as well as other warnings of that going to explode in any moment. Other pages are no less full of bullshit, thinking Orion is far smaller than it actually is, and that Betelgeuse can be eclipsed by the Sun (it doesn't)[8]

However recent (2016) calculations suggest Betelgeuse still has ~100,000 years to live before going supernova[2], with also the possibility of it exploding not as a red supergiant but as a smaller and hotter star instead.[9].

The Betelgeuse supernova is expected that will have a brightness comparable to that of the full Moon, even outshining it and giving for a couple of months a spectacular light show. However it will be mostly harmless and its expected neither the neutrinos, the UV/X-Ray/Gamma radiations, or its ejecta will affect Earth in severe ways from that distance, no matter what woo-meisters may say about much nastier effects -except perhaps messing with nocturnal animals that would confound the supernova with the Moon-. It's also expected it will leave behind a neutron star

and not a black hole, a gamma-ray burst being also highly unlikely[2].