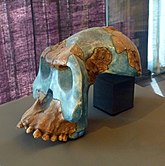 Partially-reconstructed skull from A. garhi fossils

Perhaps the most famous australopithecine is Lucy, a 40 percent complete A. afarensis fossilized skeleton about 3.2 million years old discovered by Donald Johanson in 1973. The Laetoli footprints, discovered by Mary Leakey in Tanzania in 1976, are believed to be the 3.6 million-year-old traces of two or three A. afarensis individuals preserved in volcanic ash.

The brain size of A. afarensis was about 400 cc, much smaller than that of a human. Its skull had characteristics common to an ape's, although the crowns of the teeth were small like a human's. As with apes, males of the species, at about four feet tall, were significantly larger than females. The arms and fingers were between the length of an ape's and a human's.

A. afarensis was obviously bipedal as evidenced by its lower skeletal structure, which strongly resembles that of a human. In particular the construction of the pelvic girdle, neck of the femur, knee joint and thigh bone arrangement, and heel bone indicates bipedal locomotion. This conclusion is confirmed by analysis of the shape of the footprints preserved at Laetoli.

Creationists have apparently concluded that human evolution from the likes of Australopithecus is incompatible with the belief in Biblical inerrancy. The Jehovah's Witnesses publication Life--How did it get here? By evolution or by creation? deals with this incompatibility by presenting only evidence of the australopithecines' apelike characteristics while suppressing evidence of qualities that are humanlike. The author then concludes, "If any australopithecines were found alive today, they would be put in zoos with other apes. No one would call them 'ape-men.'"[1]

The Institute for Creation Research deals with the problem of the transitional nature of the australopithecines by denying that they were bipedal. In their publication Acts & Facts they note, "Australopithecus, in the view of some leading evolutionists, was not intermediate between ape and man and did not walk upright,"[2] and cite the counter-consensus opinion of Charles Oxnard.

Jack Chick's answer is to claim that "most experts now agree Lucy was an unusual chimpanzee not a missing link."[3]