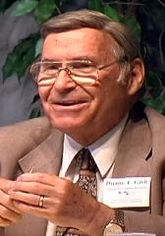 The taxidermied corpse of the late Duane Gish, as currently posed in the ICR lobby. Lifelike, no?

Duane Tolbert Gish (1921—2013[2]), a biochemist, became arguably best known as a creationist who regularly engaged in debates on the subject of creationism. Gish, once vice-president of the Institute for Creation Research (ICR), published at least 14 peer-reviewed academic papers, none related to evolutionary biology at all, and none originating after 1971.[3] He wrote more than 15 books, including Evolution, the fossils say no! (1972). Gish received a PhD in biochemistry from Berkeley in 1953 and became well known for using his experience as a researcher as a stick in debates with evolutionists, even though he had no relevant peer-reviewed papers. He retired from his long-held position as a staff scientist at ICR circa 2005 CE.[4]

Gish extensively discussed his belief that chemical evolution fails to address the question of abiogenesis and the origins of life. Gish initially regarded the Earth's age as irrelevant to creationism, but later became convinced of a Young Earth, in line with other ICR members.

See the main article on this topic: Gish gallop

Gish notoriously used a rapid-fire approach during a debate, presenting arguments and changing topics very quickly and — in a manner intended to be extra impervious to reason — arguably wisely, considering none of his individual statements would stand up to closer scrutiny.

This approach, originally known as a proof by verbosity, has since been dubbed the "Gish Gallop".

Gish was accused by evolutionists of making several blunders in his creation science writings and debates.