From RationalWiki
(Redirected from Bathmism)
Jump to: navigation, search 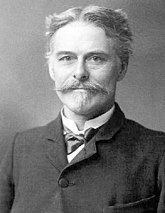 But could he cope with the drink?

Edward Drinker Cope (1840–1897) was an American paleontologist and comparative anatomist, as well as a noted herpetologist and ichthyologist. That is to say, he studied fossils, amphibians, reptiles, and fish. He was a founder of the neo-Lamarckism school of thought and was known for his theistic views on evolution, although he was better known in his own time for his role in the "Bone Wars"[1] — a 20-year long feud with his rival Othniel Charles Marsh in which both Cope and Marsh frequently engaged in bribery, theft, destruction of bones, and generally acted like assholes. Their incessant bickering and endless attacks on each other's reputations ultimately left both men bankrupt and socially ruined (although on the positive side their desperation to outdo each other in finding fossils did lead to the classification of 136 new species of dinosaur between them including famous ones like the Stegosaurus). Also, Cope had the best middle name ever.

Cope was a neo-Lamarckian and an opponent of Darwinism. He was also known for endorsing a form of orthogenesis and other non-Darwinian evolutionary processes throughout his works. He coined a number of names for alleged evolutionary processes such as Bathmism (growth-force), kinetogenesis (direct effect of use and disuse and environmental influences), archaesthetism (influence of primitive consciousness) and later catagenesis, bathmogenesis, ergogenesis, emphytogenesis, statogenesis and mnemogenesis.[2] These processes were based around the idea of Lamarckism and orthogenesis, and some other scientists dismissed them as being mystical.[3] Cope believed that variations were acquired and inherited by an underlying energy force. It has been noted that in the 1870s and 1880s when Cope was writing his evolutionary works that the idea of a mind or spiritual force guiding evolution had a broad appeal.[4]

The Bathmogenesis of Cope has been defined as the following:

Cope's Theology of Evolution (1887) argued that consciousness comes from the mind of the universe and governs evolution by directing animals to new goals.[6] According to (Sideris, 2003) "[Cope] argued that organisms respond to changes in their environments by an exercise of choice. Consciousness itself, he maintained, was the principal force in evolution. Cope credited God with having built into evolution a life force that propelled organisms toward even higher levels of consciousness."[7]

Thankfully, the creationists have not discovered the work of Cope; if they had, they'd probably quote mine and misrepresent his works. While it is true that Cope had some far-out ideas on the mechanisms of evolution he was not challenging the fact of evolution and his work in paleontology is considered very good evidence for evolution. He discovered, described, and named more than 1,000 vertebrate species including hundreds of fishes and dozens of dinosaurs. An overview of his paleontology work and other contributions to evolution was written by Henry Fairfield Osborn.[8] He also wrote more than a thousand scientific papers, a feat that remains unmatched to this day. His work in comparative anatomy, herpetology and ichthyology is also considered good evidence for evolution.