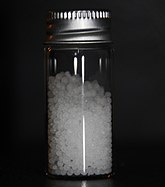 that many compounds, the "organic" ones, could only be made by living things. The others are "inorganic". Wöhler's synthesis would likely have remained a curiosity if it had not been followed by many others. However, in 1837, Heinrich Gustav Magnus

(student and lifelong friend of Berzelius),[3] during his research on the gasses of blood, dealt a significant blow to the heart of vitalistic theories: Magnus successfully applied physics (a theory of the inorganic) to the organic (i.e., Magnus was able to lay the groundwork for the field called “physiological chemistry” by using concepts from physics to investigate and subsequently determine the oxygen and carbon dioxide content of blood)[3] by producing a scientific foundation for a correct theory of respiration.[4] More strikingly (that is, with regards to Wöhler), in 1845, one of Wöhler's students, Adolph Kolbe,

published in 1912 a landmark work, The Mechanistic Conception of Life.[5] He described experiments on how, as Bertrand Russell put it (Religion and Science), a sea urchin could have a pin for its father. He also offered this challenge:

In New Age, spiritual virtue or power is said to be achieved by manipulation or enhancement of a mysterious force sometimes called qi, Orgone, the bioenergetic field, or "energy".[6] Modern New Agers might use quantum woo instead of the older traditions of faith healing to attract customers who believe that a Harmonized Quantum-Synthetical Channelling Energetic Alignment System is a good way to prevent cancer. Quacks combine vitalism and New Age with alternative medicine, promising to cure a wide range of different afflictions using pseudoscientific methods such as acupuncture and inappropriate chiropractic. Those few instances when customers do experience results are likely due to the placebo effect or the disease getting better on its own. Those who question claims made by vitalists are typically buried in a pile of excessively confusing woo jargon.

Therapeutic touch practitioners are those who claim that they can directly experience the energy promoted by vitalism and control or channel that energy in such a way that a person would magically become better. Note that the "energy" commonly referenced by such quacks is not the same as the scientific ability to do work. Therapeutic touch may also hide behind even less understood terms like rays and vibration or between made-up things called auras. There has yet to be any scientific study that has not proven these variations of vitalism utterly wrong.[7]