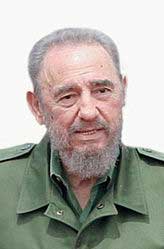 "Elections!? We have elections

, but the candidates are all commies!" 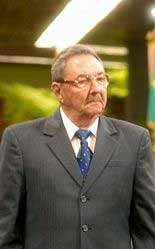 Fidel Alejandro Castro Ruz (1926—2016) was a Marxist leader and cigar aficionado. He was the First Secretary of the Communist Party of Cuba from 1961 until 2011, Prime Minister from 1959 to 1976, and President of the State Council from 1976 until his official resignation in February 2008, being Cuba's leader for almost 50 years.[2] In addition, Cuba did almost end the world that one time.

After Fidel Castro resigned due to illness in 2008, his duties were taken over by his brother Raúl Castro, who is notable for having been known by nobody until that point. The latter announced in 2013 he would not seek reelection to the post.[3] However, Raúl either changed his mind or lied about this, depending on who you ask, being elected to a second term in 2013, but promised this would be his last.[4] Somewhat surprisingly, Raúl Castro actually kept his promise.[5]

Castro's father was a sugar plantation owner from Spanish Galicia named Ángel Castro, and his mother was Lina Ruz (his father's maid). The young Fidel progressed through Catholic schools to study law at Havana University in 1945. There, his involvement in student politics included a 1947 attempt to overthrow the Dominican

, and, in 1948, membership of the newly formed nationalist Ortodoxo Party. That same year he married Mirta Díaz-Balart, and had a son in 1949, Fidel Castro Díaz-Balart, who was head of Cuba's atomic energy bureau.

Castro divorced Díaz-Balart in 1954. In 1956, he had a daughter named Alina Fernández with Natalia Revuelta, who fled to the United States in 1993 and became an outspoken critic of his regime.

After graduating in 1950, Castro entered law practice specializing in poor people's cases. In 1953 he was involved in a first unsuccessful attempt to overthrow dictator Fulgencio Batista. Imprisoned, then exiled to Mexico, Castro returned to Cuba in 1956 to organize the revolution.

Fulgencio Batista seized power in a March 10, 1952 military coup d'état from Auténtico party president Carlos Prío and then set new records for political corruption and incompetence on the island. Fidel Castro's first bid to overthrow Batista took place on July 26, 1953, when he led 160 other revolutionaries in seizing the Moncada barracks in Santiago. The object was to spark a rebellion among Cuban youth against the government. The attack failed and Castro and 27 comrades were eventually captured, tried and imprisoned.[6] In October 1954, Fidel's influential "History Will Absolve Me" was published clandestinely and circulated throughout Cuba. On May 15, 1955, Fidel and the others were released under an amnesty. Fidel, Raul and several more than went into exile in Mexico on July 7, 1955, where they were joined by future guerrilla leader Ernesto "Che" Guevara.

The revolutionaries, now organized as the "July 26 Revolutionary Movement," sailed on the Granma from Mexico to Cuba on December 2, 1956. After a lengthy guerrilla campaign, Batista was toppled on January 1st, 1959. Castro set up a communist regime with himself as maximum leader. According to its detractors, he transformed Cuba into a politically repressive one-party communist state,[7][8] but proponents argue that it is actually a popular grassroots democracy. A more accurate assessment would probably be that he transformed a politically and financially repressive dictatorship into merely a politically repressive dictatorship.

At the time Castro took over, Cuba was essentially run by US corporations in league with the government. Castro came in and did the unthinkable: he took all of it. The plantations, the casinos, etc. The mob, for one, was not happy. Not only had Castro fooled the U.S. into helping him topple the regime, he then turned around and said rotfl jk I'm nationalizing all this. The CIA tried and failed to assassinate him multiple times,[9] and in 1962 the U.S. imposed an economic embargo on Cuba. Later, Castro was excommunicated by Pope John XXIII, but he didn't care. With full support from the now-defunct Soviet Union, Castro had started deep transformations in the island, leading to the Cuban Missile Crisis.

Public education, sports and particularly public health, were much developed. However, after the Soviet Union collapsed in 1991, Cuba's economy plunged, with massive power, gas and water outages.

Like many of the other sugar daddies of the revolution, Castro acted on his own special blend of socialist thought which bears his name, albeit somewhat informally. Like many Soviet inspired revolutionary ideologies, it is at its core Marxism-Leninism with a few key ideological changes, most important of which is the rejection of Lenin's idea of a vanguard party establishing a base of political support among the proles, instead proposing that a smaller band of guerrilla fighters win popular support through active insurgency against the bourgeois. In a nutshell, don't tell people about the revolution, show them the revolution.

Other tenets of Castroist thought include nationalization of foreign businesses, as experienced by the United States, and the forceful implementation of a different blend of social inequality (albeit better than under Batista).

Fidel's death had been eagerly anticipated, and even encouraged by right-wingers (as noted above) for over half a century; he outlived Margaret Thatcher, for crying out loud, but he died on a Black Friday.[10] Andrew Schlafly has even been celebrating it since 2006.[11] After all the foreplay with the Grim Reaper, it finally landed the coup de grace on Saturday, November 26, 2016, 3:29 AM UTC +00:00. (That's 11:29 PM on Friday, November 25, local time.) Morbidly enough, this was Black Friday, which is a day where massive throngs of people in capitalist countries buy expensive gizmos they couldn't have in Cuba thanks to the economic sanctions enforced by the United States, not to mention the hopelessly incompetent command economy.