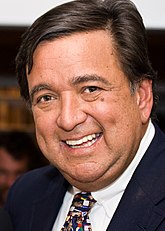 Tom Bosley Bill Richardson, during one of his beardless phases.

William Blaine Richardson III (1947–) was the governor of the state of New Mexico and was destined for even greater things in the Obama administration until he withdrew under pressure of a federal investigation.[1] He is known for being a big bear of a man and occasionally sporting a pretty fantastic beard - when he shaved it off, no less than the President-elect mourned it publicly during a press conference.[2]

Richardson worked as a hostage negotiator in the Clinton administration. He proved to be one of the few people to understand Iraq's politics when he freed two Americans held in Iraqi custody.[3]

He was an unsuccessful candidate for President in 2008. While he was the first Hispanic to be a serious contender for the presidency, being Mexican simply isn't that impressive when you're running against a woman, a black man, and an elf. He also was shoehorned into the role of "the Hispanic candidate," rather than as someone representing the Democratic Party.[4]

It didn't help that he made many gaffes, particularly in front of key Democratic constituencies. The greatest example was when, asked by LOGO during the "gay debate" whether homosexuality was a choice, he rapidly assented and said it was, despite all evidence to the contrary and the normal stance taken by gays and gay rights groups.[5]

He is the founder of the Richardson Center, a nonprofit that works to release political prisoners with an emphasis on Americans imprisoned in North Korea. The group was responsible for the successful negotiation of Evan Hunziker

This united States politics-related article is a stub.
You can help RationalWiki by expanding it.
Retrieved from "https://rationalwiki.org/w/index.php?title=Bill_Richardson&oldid=2255414"
Categories:
Hidden category: