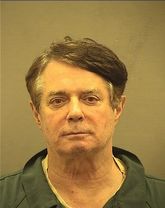 Paul John Manafort Jr. (1949–) is an American lobbyist, political consultant and lawyer (oh, and criminal). He began his political career in 1976, working for President Gerald Ford against then-Governor Ronald Reagan on the floor of the Republican National Convention.[2] He has since worked for nearly every Republican candidate for President, including George W. Bush and Donald Trump.

By 1980, Manafort was working for Reagan, and after Reagan's victory he opened the lobbying firm "Black, Manafort, Stone and Kelly"

According to Stone, the firm "lined up most of the dictators in the world that we could find. Pro-western dictators, of course. Dictators are in the eye of the beholder."[2] The firm was regarded as one of the "Torturer's Lobbies" by The Center for Public Integrity in 1992.[3] The firm was reported to have been paid by a variety of dictators or organizations associated with dictators: $1 million by Nigeria in 1991 (Sani Abacha

but failed due to his being overthrown just before the agreement was to be signed.[4] (So, silver linings, we guess?)

In 2005, Manafort formed a partnership with Oleg Deripaska,

In Ukraine, Paul Manafort had a shadow government (a.k.a. deep state) that included a person in every ministry during the presidency of Viktor Yanukovych.

[6] Manafort advised the Party of Regions, a Ukrainian pro-Russian political party, whose secret ledger had designated 22 payments totalling $12.7 million in cash payments to Manafort.[7] Manafort claimed that he never received the money.[7] He reportedly played a decisive role in getting Viktor Yanukovych of the Party of Regions elected President in 2010; Yanukovych was later overthrown in 2014 and fled to Russia.[7]

John McCain knew about Manafort's connection to Russia and prevented him from running the 2008 RNC.[8] 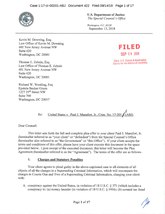 Manafort likely met Trump as early as 1980, but Stone, his partner at BMSK, did meet Trump and Roy Cohn in 1979.[9] Trump was BMSK's first client in 1980.[9] During 5 months of the 2016 U.S. presidential election, Manafort was campaign chairman for Donald Trump,[2] allegedly as a volunteer.[9] It's hard to believe that after courting millions from dictators that Manafort would work for free for anyone. He, in fact, became furious when an employee volunteered to monitor the Nicaraguan elections on her own time.[4]

On October 27, 2017, Manafort was indicted along with Richard W. Gates III by a federal grand jury under the direction of FBI special counsel Robert Mueller.[10] The charges against Manafort are:[11][12]

The indictment alleges, among other things, that under his firm Davis Manafort International (DMI), Manafort illegally lobbied for and received laundered money from former Ukrainian President Viktor Yanukovych, an ally of Vladimir Putin.[14] DMI began working with Yanukovych beginning in 2004.[9]

Additional details of Manafort's alleged financial misdeeds were also filed on the same day in a separate court.[16] On August 2018, Manafort was found guilty of eight of these charges while a mistrial was declared on the remaining ten.[17]

On June 8, 2018, Manafort was additionally charged with two counts of obstruction of justice over accusations of witness tampering while he was out on bail for the other charges.[18] On June 15, Manafort's bail was revoked and he was taken to jail.[19]

In July 2018, Special Counsel Robert S. Mueller III presented over 500 pieces of evidence against Manafort and 300 charges against him, none of which involve collusion or conspiring with Russia to hack emails, so far.[20]

Manafort was convicted in his first trial on 8 counts of tax and bank fraud charges with mistrials on 10 other charges in August 2018.[21]

As part of a plea agreement to avoid a second trial, on September 14, 2018, Manafort pled guilty to two criminal charges: that he cheated the IRS and that he violated foreign lobbying laws.[22] As part of the agreement, Manafort also agreed to fully cooperate with the Mueller investigation.[22] Manafort then later changed his mind about cooperating and was sentenced to a total of 90 months in two courts for his crimes.[23] On the same day as his second sentencing, he was charged with 16 felony charges in New York State court,[24] which if convicted would be outside the purview of a presidential pardon.[25] The state charges include residential mortgage fraud, conspiracy, falsifying business records, and scheming to defraud.[25]

In 2017, a hacker released a trove of phone texts that were allegedly from his daughter, Andrea Manafort Shand.[26][27] Manafort confirmed that he had been blackmailed over the texts before they were released.[26] Manafort also confirmed that his daughter had been hacked and confirmed the authenticity of at least some of the texts.[28] The texts, if authentic, include some highly incriminating statements: