The official title of this majestic building is "The Hope4Cancer Institute in Playas de Tijuana, Mexico". 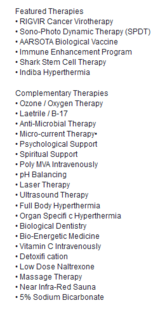 The treatment menu at Hope4Cancer in 2016. You have the life-threatening illness, we have the bells and whistles and lasers to do nothing with it!

"Dr Tony" demonstrates the bespoke light-bed at "Hope4Cancer Institute", as used for SPDT.

Hope4Cancer is an alt-med clinic in Mexico where naive individuals have received a variety of quack treatments, including Laetrile, Iscador, BX Protocol, CRONaxal, Poly-MVA, GcMAF, shark cartilage, sono photo dynamic therapy, and ozone therapy, reportedly at a cost of at least $15,000 per week.[1][2] Hope4Cancer clinic does provide hope... for cancer itself—notice that its name studiously avoids saying HopeForCancer, similarly to how Froot Loops is spelled that way because it doesn't contain any fruit.

The founder and his fellows[edit]

Dr Antonio “Tony” Jimenez is the founder and proprietor of the Hope4Cancer “Institute”.[3] When reviewing the behavior of Dr Tony it's difficult not to think of The Simpsons' cartoon character Dr. Nick, but unfortunately Dr Tony is real.

According to Dr Tony's biography on his Hope4Cancer website, he was taught ozone therapy by a Nobel laureate called “Basil Wainwright PhD”.[4] To date, no one called Wainwright has won a Nobel prize.[5] Tony's mentor, Basil Earle Wainwright, a/k/a "Dr Roderick Edward Stone", a/k/a "King Con", has been jailed in the UK & US: found guilty of theft, fraud and practicing medicine without a license[6] (Basil would have been jailed in a third continent if he hadn't fled from Kenya).[7]

The Hope4Cancer website says Dr Tony Jimenez has "trained with Ireland's Dr. Tom Cleary, who was internationally known for his work with SonoPhoto Dynamic Therapy (SPDT)".[8] In Ireland that Dr. Tom Cleary used SPDT, a/k/a CLT, alongside an American ex-surgeon called Dr. William Howard Porter. Dr. Porter lost his license to practice medicine in 1994 for gross negligence.[9] In order to avoid a similar fate, "Ireland's Dr. Tom Cleary" promised "not to engage in the practice of CLT" in 2004.[10]

A more recent associate of Hope4Cancer's Dr Tony is Dewayne Lee Smith "PhD", purportedly the inventor of the BX Protocol cure-all (which is just water costing US$16,995). Dr Tony Jimenez is on the board of the company that makes BX Protocol[11] (as are Rashid Buttar and Sherri Tenpenny). In June 2019 the company behind BX Protocol stated they were closed down by the FDA's office of criminal investigations

Dr Tony's résumé says he is a member of the "American Academy of Anti-Aging Medicine (A4M)".[13] The founders of "A4M", Dr Ronald M. Klatz D.O. & Robert M. Goldman D.O., were both fined $5000 in the year 2000 by their state medical board for incorrectly adding the title "M.D." to their names.[14] On the Hope4Cancer website Dr Tony is described as "Dr. Antonio Jimenez, M.D., N.D., C.N.C."[15] His résumé also states that he is a practitioner of iridology: a diagnostic technique whose validity is comparable with phrenology and rumpology).

Dr Tony's missus is in on the act: she's the president of a company called "Pacific Medical Solutions Inc,"[16] which makes a nutritional supplement called "Liquid Oxygen" (sounds very cool), which is used at Hope4Cancer.[17]

Dr Tony claims metal fillings in teeth can cause cancer (predominantly ipsilaterally) and the removal of the fillings/teeth can slow the progression of the aforementioned cancer.[18] Dr Tony is a follower of Ryke Geerd Hamer, claiming that cancerous tumors can shrink if the sufferer talks about the worst emotional traumas they have ever experienced.[19]

"Double Helix Water®"[22] is offered at Hope4Cancer.[23] Ingredients: pure water, but with an extortionate price tag (>$4K per liter), because the water is allegedly structured. Evidence offered as to the efficacy of "Double Helix Water®" is in the form of before-after images of live blood analysis[24] (with a quack Miranda warning in small print[25]).

Photographs used in a Hope4Cancer slideshow, allegedly illustrating the effectiveness of their "SPDT",[26] were lifted from elsewhere. The images actually show two different PDT

protocols: each using different photosensitisers & different wavelengths of laser light.[27] Also the photos are of tumor cells grown in animals (in vivo), not "Tissue Culture" (in vitro), as stated on the Hope4Cancer slideshow on SPDT.

A Burzynski-esque procedure is performed in the Hope4Cancer clinic: cancer sufferers are injected with something derived from their own urine. Allegedly this is a form of immunotherapy, called AARSOTA[28] (as used by Rashid Buttar[29]).

Dr Tony recommends cancer sufferers carry a CyberScan card[30] (indistinguishable from a bank card), suggesting it can monitor their health if its magnetic strip is placed against their body (the manufacturers of CyberScan say otherwise).[31]

On the Hope4Cancer website Dr Tony has reproduced an article which claims intestinal parasites can be a cause of breast cancer (the article includes a reference to Hulda Clark). You can read that "old fecal matter" here.[32]

The disclaimer on the Hope4Cancer webpages says “testimonials are not intended to make claims that our treatments, products and/or services can be used to … cure … any disease”. However the metadata

keywords (a.k.a. tags) on their YouTube testimonial videos repeatedly include the phrase "cancer cures" …

So anyone (unwisely) searching YouTube for a cure for cancer is unduly likely to be shown Hope4Cancer's videos tagged with the "cancer cures" keywords.

If you're now thinking no one would buy Dr Tony's baloney, think again: some of his prospective customers can be seen cyberbegging for donations to pay for treatment at his Hope4Cancer clinic, e.g. here and here.