From RationalWiki
(Redirected from Cranks)
Jump to navigation Jump to search 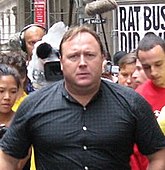 Alex Jones at a 9/11-truther rally.
For the drug, see Methamphetamine. For the exceptionally silly awesome movie, you need to be elsewhere.

The term "crank" pejoratively labels someone who holds extremely unorthodox views on a subject and is often very vocal about these opinions. Synonyms include kook, contrarian, nut and crackpot — the "crackpot" variant has led to the coining of the term "psychoceramics" as the name for the study of such people.[2] Cranks who believe a number of different nutty things all at once are said to suffer from crank magnetism.

Cranks will usually maintain their viewpoint despite — or perhaps because of — evidence to the contrary. The typical crank is an amateur in the field they are arguing against, but occasionally, individuals with genuine expertise in the field in question will turn into cranks (which generally leads to pathological science).[note 1] Sometimes, this transformation occurs for reasons of personal gain — which is ironic, as cranks will often accuse non-cranks of being driven by personal gain.[note 2]

Cranks routinely emerge in all fields of study, holding a wide variety of inaccurate or unorthodox views. These range from being able to square the circle with a straightedge and a compass, through Reptoid-watchers, to Biblical literalists in the creationism movement and beyond.

If you value your time and/or sanity, then under no circumstances should you willingly enter into debate with a crank. A crank's cognitive processes are impregnable to all forms of logic, reason, evidence, and in extreme cases, basic facts.

Crank debaters tend to be much, much more motivated than you are. This enthusiasm is a big part of what makes them cranks. This means that the crank will have heard all of the common objections to their crankiness. The crank has memorized canned responses to each of them.

A common tactic of cranks is to hide behind elaborate rhetoric; if you can't dazzle them with brilliance, baffle them with bullshit. An extravagantly ornate lexicon filled with polysyllabic verbiage will be utilized unnecessarily, inappropriately, and often erroneously, because if their opposition's comprehension is obfuscated, it's because their opponent is cogitatively inadequate and not because the crank malcommunicates. Never expect a fancy word such as "terse" to grace their tongues. Superfluous rhetoric itself is not proof of crankery, but is a good warning sign.

All of this has the practical upshot of rendering the debate a fantastic waste of calories.

The worst of the cranks[edit]

Well known cranks (in alphabetical order) and some of their "ideas" include: