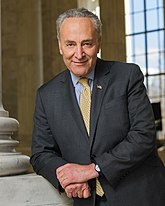 Charles Ellis "Chuck" Schumer (1950–) is a very stale politician, serving as the Senior United States Senator from New York[1], while Kirsten Gillibrand is the Junior Senator for that state. In 2017, he became the Minority Party Leader in the Senate, succeeding the retired Harry Reid,[2] and became the Majority Leader after the Democrats took the Senate and Presidency in 2021.[3] He graduated from Harvard[4] and has served in both the House and Senate. He is the son of Abe and Selma Schumer, and is Jewish.[4]

Although he voted for the Defense of Marriage Act as a Representative,[5] he later revoked his previous view and came out in support of same-sex marriage in 2009.[6]

He co-sponsored a bill in October 2001 that condemned violence and bigotry towards Sikh-Americans in the name of anti-terrorism.[7]

He also supports decriminalizing marijuana at the Federal level.[9]

As a Representative, he opposed the repeal of the Glass-Steagall Act,[10] but later supported the repeal as a Senator.[11]

A New York Times report from 2008 showed that Chuck Schumer has had a lengthy history of protecting the financial industry from stricter government oversight and regulations.[12]

"Just as our free highway system helped build jobs in America in the 20th century, Net Neutrality will help build jobs in the 21st century. To take a step back hurts our economy, our job growth and middle-class and working people. It is a disaster."[13]

Schumer voted for the Affordable Care Act,[14] but does not have a clear opinion on whether he supports any specific universal health care proposals.[15]

As representative, Schumer voted yes for authorization on air strikes and using necessary force against Yugoslavian forces in Kosovo in the 1990s. As a senator, he was also one of 77 Senators in October 2002 who voted yes on what would become the disastrous Iraq War.[16]

Schumer was opposed to the Iran nuclear deal.[17]

Schumer is also pro-Israel, siding with the country in the 2014 Israel-Gaza conflict,[18] and supporting Trump's decision to move the US embassy to Jerusalem.[19]

Schumer voted in favor of the USA PATRIOT Act.[20]

This united States politics-related article is a stub.
You can help RationalWiki by expanding it.
Retrieved from "https://rationalwiki.org/w/index.php?title=Chuck_Schumer&oldid=2464744"
Categories:
Hidden categories: