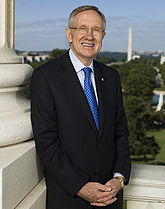 Did you know, when I was your age, I had a sssilver dollar collection?!

Harry Reid (1939–2021) was the former leader of the Democratic Party in the United States Senate, representing Nevada.[1] This was despite being a rather conservative Mormon convert. He was responsible for passing the 2013 "nuclear option" on executive appointments, and was instrumental to the passage of the Affordable Care Act.

When he was elected (following Tom Daschle's electoral defeat), it was thought that his mild manner concealed a shrewd strategist who would be able to quietly wrestle the Republicans to the ground. The mild and quiet part has seemed to be correct so far... but we live in times where the leaders of the opposing party are trying to hold off their members from impeaching the President at any moment, so it's been a daily struggle. Considering Reid's own not-so polite comments about President Obama's lack of a "negro dialect" in 2010, he was never quite as mild-mannered as people thought.

In February 2011, Harry Reid showed he really has his priorities straight during a time of economic crisis by giving a speech to the Nevada legislature on the subject of "the time has come for us to outlaw prostitution."[2] It seems the nice Mormon is tired of having capitalist businesses and pro-family mothers balk at relocating to Nevada because they don't want their precious children and employees in the same town with Silly Sally's Chicken Ranch. (The American penchant for moral panic never seems to end, does it?) Perhaps he was being ironic given that latest current residence of Washington, D.C. was the very definition of legal prostitution.

Reid really hated the Koch Brothers, mentioning them in 22 separate Senate speeches in just the first seven months of 2014, accosting them around 250 times in total.[3] He also described their funding of right-wing academia and vast campaign finance network (which donates almost exclusively to Republicans) as "un-American" and "rigging the political system in their favor". Considering the Kochs' long-term goal is to completely gut or end almost every progressive reform made since at least the New Deal, transforming America into the free market neo-feudal state libertarians and Ayn Rand devotees dream of in the process, this criticism isn't exactly unfounded.

Reid was one of the few elected Democrats who consistently showed a willingness to fight dirty, and perhaps the most notable example of this occurred during the 2012 general election. Reid took advantage of Republican nominee Mitt Romney's hesitance to release his tax returns by contacting The Huffington Post and, in an interview with Post reporter Sam Stein, accused Romney of being a serial tax evader. Reid specifically claimed that Romney had not paid any taxes in the past decade, citing an anonymous source at Bain Capital; Reid later reiterated these accusations in a speech on the Senate Floor.[4] While Reid refused to reveal the identity of his supposed source and conceded he was "not certain," about the veracity of the allegations, they still generated much media buzz, no doubt due to the allegation reinforcing the (accurate) idea of Romney as an out-of-touch Wall Street banker (an image the Democrats, and the Obama campaign in particular, were playing up), to the point that Romney was forced to publicly deny them. Reid evidently has no regrets about the stunt; when asked in 2015 if he felt what he did was wrong, his only response was "Romney didn't win, did he?"[5]

Although it is has been generally acknowledged by tax experts that Mr. Romney probably paid taxes for most of the years in question, he did not conclusively prove his case by releasing his tax returns for the two decades previous to the 2012 election. Instead, his campaign issued a notarized summary of the taxes he claimed to have paid since 1990. It may be worth noting that such a public declaration is no more than a claim on paper with a seal legally identifying the party making it.

He also had a long-time interest in UFOs, calling for increased government research; while he was a senator his advocacy led to a Pentagon program, the Advanced Aerospace Threat Identification Program, which received $22m in funding from 2007.[6] He said that he was not personally sure if UFOs exist, but based on the many people in the military who have seen them, it merits further research.[7]