Proposals for new US states

Almost since the formation of the USA as a union of thirteen states, there have been arguments about splitting or combining states into new entities. The most famous proposal is probably the State of Jefferson made up of parts of California and Oregon. There have been other plans to partition California and Texas, two of the largest and most populous states, and to divide other states in more or less logical ways. 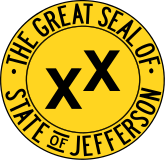 The State of Jefferson is a proposed new state in the United States which would consist of the counties presently in far northern California and southwestern Oregon.

The State of Jefferson was first proposed by the mayor of Port Orford, Oregon in October 1941 and the idea actually got the endorsement of several county governments in the region. The movement got as far as the selection of Yreka (Siskiyou County, California) as the provisional state capital and Jefferson as the name of the new state, but the attack on Pearl Harbor in December brought the movement to an abrupt halt.[1]

The idea has recently been revived and appears to be mainly motivated by property rights concerns and conservative unhappiness with the perceived liberal bent in the California and Oregon state governments. After the election of Donald Trump in 2016, liberals called for the secession of California from the United States (CalExit), but Trump supporters in the north of the state saw this as another reason to detach from liberal California.[2]

In 2018, Citizens for Fair Representation, led by Mark Baird of the State of Jefferson movement, litigated to try and increase the size of California's senate by adding 1200 members to represent the 90-fold increase in California's population since California's legislature was originally created; they lost the case.[3][4] It's unclear if this was a deliberate attempt to sabotage the Californian state government, or some other form of protest.

Under the United States Constitution, "no new State shall be formed or erected within the Jurisdiction of any other State; nor any State be formed by the Junction of two or more States, or Parts of States, without the Consent of the Legislatures of the States concerned as well as of the Congress." (Article IV, Section 3, Clause 1).[5]

Dividing California into two or three states (or even six) has been proposed several times. California was originally partitioned by the Mexicans in 1804 into Alta California (now part of the US) and Baja California (still part of Mexico). In 1855 the California State Assembly passed a resolution calling for trisection, creating new states called Shasta in the north and Colorado (not the current state) in the south, but it died due to legislators having other priorities. The Pico Act in 1859 called for the region south of the 36th parallel to become a new territory; it actually passed at the ballot and was signed by the governor, but by then the U.S. Congress had other things on its mind and did not approve it.[6]

In 1965, state senator Richard J. Dolwig proposed a split 100 miles north of Los Angeles; it passed in the State Senate but ground to a halt in committee.[1] A failed ballot measure during the 1990s would have split California into three states; proposed by Stan Statham, it called for a non-binding referendum, but was killed in committee.[1] There was another proposal around 2011 to separate conservative-leaning counties of Southern California (excluding areas like Los Angeles County) from the rest of California over the liberal politics of Sacramento, but this failed to garner any support. Tech venture capitalist, Bitcoin proponent, and self-proclaimed inventor of viral marketing Tim Draper

tried to get a "Six Californias" proposal on the 2016 ballot, but also failed.[7] Draper proposed the generally boring names of Jefferson, North California, Silicon Valley, Central California, West California, and South California for the new states.[1]

Texas was given the right to split into five when it joined the US in 1845. This has been occasionally suggested to increase its power in the Senate and Electoral College, as well as to help underrepresented areas, mainly in the west. The US Congress rejected one 1869 proposal for the State of Lincoln south and west of the Colorado River, but other proposals (including panhandle secession in 1915 and 1935 plans for Texlahoma) didn't get that far; today nobody wants to mess with Texas.[8]

Michigan is divided into two parts by the Great Lakes, and the State of Superior is a hypothetical proposal for the upper peninsula of Michigan. Its rural character is very different to the area around Detroit, and secession of the upper peninsula (and possibly part of the "mitten") was seriously attempted in the Michigan legislature in the 1970s but it failed to get enough support to get on the ballot. With just over 300,000 people, it would be the least populated state in the union, and its viability and tax base is uncertain.[9] According to Wikipedia there is no current movement for a new state.[10]

Coming up with a cool name is one of the hardest parts of formulating your state proposal. One of the most common sources seems to be the names of popular presidents and Founding Fathers, hence Jefferson, Lincoln, and Franklin. Rivers and lakes are also quite popular, although many already have states named after them (Mississippi, Missouri, Ohio, Tennessee, Colorado, Arkansas, Delaware, Michigan) so the pool is limited. Absaroka and Kootenai were proposals named after Native American tribes, which has also been the source of several actual state names. The last resort is "north/south/east/west X" which was good enough for the Dakotas and Carolinas, but in these days when states compete fiercely for inward investment, something more catchy is probably required.[27] California was apparently named after a fictional island in a then-popular novel, while the name Idaho was completely made up, so really the sky is the limit.[28][29]