From RationalWiki
(Redirected from Sikh)
Jump to navigation Jump to search

The Khanda, the most widely recognized symbol of Sikhism.

Sikhism is a religion founded in India around 1500 CE. It ranks fifth among religions in terms of worldwide membership-numbers (about 26 million). Many Sikhs conform to the traditions of Khalsa, which includes various specific rules on diet, observance, behavior, etc; however not all Sikhs do, and there is sometimes conflict between the two groups.[1]

Contrary to popular belief, Sikhs are not Muslims. Unfortunately, this fact is irrelevant to some Islamophobes—who see a bearded, brown-skinned man in linen headgear as a looming terrorist threat.[2][3] Some Sikhs are hostile to or try to distance themselves from Muslims as a result, but many show solidarity.[4]

Sikhism is much younger than most major world religions. It is based on the teachings of Guru Nanak

The homeland of most Sikhs is the Punjab, which is currently split between India and Pakistan. However that has not always been the case; in the 18th century, there were many independent Sikh states in the area, from which Ranjit Singh established the Sikh Empire in 1799, which lasted until the British defeated them and captured Punjab in 1849.[5] Following independence of British India, the region was partitioned between India and Pakistan; while India is predominantly Hindu and Pakistan predominantly Muslim, Sikhs were denied a homeland.

Since then there has been tension between Sikhs and Hindus in India, which boiled over in 1984 when Sikh militants occupied the Golden Temple in Amritsar, and Indian troops attacked, killing hundreds of militants and Sikh civilians; this was followed by anti-Sikh pogroms in India which killed thousands more. The assassination of Indira Gandhi and possibly the bombing of Air India Flight 182 are considered reprisals by Sikh terrorists.[6]

Today, there are Sikh nationalists in the Punjab, trying to establish an independent Sikh state they wish to call Khalistan; this is separate from secular Punjabi nationalists who focus on ethnic nationalism.[7]

The main holy book for Sikhs is the Gurū Granth Sāhib,[8] also sometimes called the Ādi Granth, although more strictly this name refers to the first volume of scriptures, which were compiled under Guru Arjan in 1603-1604 based on Guru Nanak's poetry. Guru Gobind Singh finalised the scriptures in 1678.[9]

While Christianity has seven deadly sins, Sikhs only have to worry about five: lust, anger, greed, worldly attachment, and pride.[10]

Sikhism's stated values more or less boil down to "be a good person and do good for other people", and Sikhs espouse a system of absolute equality between genders, religions, and races.

Sikhs do not believe in heaven or hell (although they do believe in a form of reincarnation[11]), but do hold that paradise can be found on Earth by doing good deeds and helping others. Sikhs are not supposed to have faith in any meaningless rituals (fasting, idol worship, going on pilgrimages etc.) and think that any ritual or practice which cannot be explained rationally should be discarded, although this has not stopped them from having rituals and gatherings of various kinds. Sikhs are forbidden to proselytize, but anyone who willingly converts to Sikhism is to be accepted, regardless of race, gender or nationality. Sikhs are forbidden to consume alcohol or other intoxicants.

Sikhism espouses monotheism and the concept of a divine eternal Oneness who has created and permeates all things.[12]

If you ever find yourself hungry in a strange land, seek out a Sikh temple. All Sikh temples are required to serve meals to anyone who is hungry, regardless of their faith. Usually they will serve vegetarian foods and drinks in an attempt to appeal to most people (as almost everyone eats veggies but not all eat meat); however you may find some that do offer meat in rare places.

Sikhs do not practice circumcision, making Sikhism one of the few religions in which the body is considered sacred, and actually consistent on the matter. Sikh holy scripture does not specifically mention homosexuality, and opinion on it varies, with younger generations being more accepting. 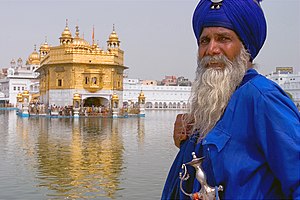 We could have made a pretty Sikh pun for this image's caption, but we chose not to.

The men take the name Singh ("lion") and women take the name Kaur ("princess") to disassociate themselves from the Indian caste system, in which family names can identify a person as belonging to a particular rank.

Fun fact: Star Trek's Khan Noonien Singh is thought to have been Sikh, or of a Sikh background.

Khalsa Sikhs look distinctive because they are forbidden to cut their hair unless absolutely necessary (such as for medical reasons), instead keeping it wrapped up in turbans.[note 1]

Khalsa Sikhs are also required to keep certain items with them at all times, known as the 5 Ks, including a comb (kanga), a steel bracelet (kara), undergarments (this is interpreted by most Sikhs as simply wearing underwear, which was once considered a very hygienic thing to do as opposed to the norm), and the kirpan, a ceremonial knife; kesh or uncut hair completes the five.[13]

The requirement that baptized Sikhs carry a weapon at all times is the most controversial. It usually takes the form of a ceremonial dagger called a kirpan

(which may or may not actually be usable as a weapon), though some have been known to wear swords or other weapons. This is considered important enough that in India as well as in several European countries Sikhs' knives are often exempted under certain circumstances from laws against the public carrying of weapons. However, it can cause problems in certain situations, such as when flying.[14]

Sikhs debate attitudes to eating meat: some feel that a vegetarian diet is best, as it does not harm innocent creatures, while others have no problems eating meat.[15] Their only dietary law is that any meat that is eaten is to be from an animal killed instantaneously rather than being slowly bled, making it akin to a reverse kosher. This means that they cannot eat halal or kosher meat, which leads to occasional tensions with other faiths (and separate restaurants).[16]

They are not supposed to drink alcohol, although some do anyway.[17]

, and has much in common with Sikhism, including a belief in equality and opposition to the Indian caste system; Ravidass was a figure in the Bhakti movement

, a medieval Hindu philosophy that itself partly inspired Sikhism. However there is dispute over whether Ravidassia is a form of Sikhism or a separate religion, whether it accurately reflects Ravidass's teachings, and exactly how old it is. Although some of its influences are old, it appears to have been formally constituted as a separate religion only in 2010 by members of India's Scheduled Castes (Dalit/“untouchables”) community.[18][19]