From RationalWiki
(Redirected from Crimea)
Jump to: navigation, search 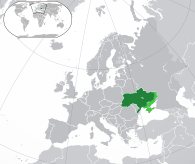 Ukraine is a nation in Eastern Europe, near the ill-defined border with Asia. It is comparatively unimportant, being only the second-largest country in Europe (after Russia). Ukraine's capital, Kiev (or Kyiv) is considered the key hub of East Slavic culture.[1][2] Once part of the Soviet Union (declaring independence on 24 August 1991), Ukraine is a potential candidate member of the European Union, although the common Eastern Bloc levels of corruption and economic underdevelopment would be a large hurdle before that - even without the internal and external political clusterfuck omnishambles that developed in 2014.

Due to a quirk of geography, most of the natural gas Russia sells to Europe passes through Ukraine. Sometimes Russia tries to punish Ukraine for being in arrears on their gas payments by cutting the flow of gas to Ukraine, but then Ukraine makes up the shortfall from the gas that was supposed to go to Germany, forcing Russia to cut off the gas altogether in the middle of the winter. And France just laughs, because 90% of its energy comes from nuclear power.

Ukraine also had the dubious distinction of having to redo their 2005 presidential election because of widespread fraud; during this campaign the eventual winner, Viktor Yushchenko, suffered one of the most acute cases of dioxin poisoning ever recorded.[3] Russia got the blame for all of this, as is usual in Ukraine.[note 1]

It can be argued that much of modern Ukraine's borders were drawn up by the USSR. What is now Western Ukraine was part of Poland (Kresy

) from 1919-1945, which Poland itself annexed from the short-lived Ukrainian People's Republic

in 1918. Piłsudski's Polish government unsuccessfully tried to suppress Ukrainian nationalists in the region, which resulted in retaliatory massacres of Poles

after the Nazi occupation.

Stalin caused a famine there in 1932 which killed at least 3 million Ukrainians, and after the Germans occupied the region in 1941

from the Russian SFSR to the Ukrainian SSR, not knowing that it would cause further headaches 60 years later. Russian nationalists, especially those who supported Russia's own annexation of Crimea in 2014

often make the argument that Khrushchev's transfer was a personal gesture in contravention of the then Soviet Constitution.

Ukrainian history since then is relatively uneventful, until 1986 when a nuclear power plant in Chernobyl exploded. The region was quickly evacuated and remains a ghost town to this day. 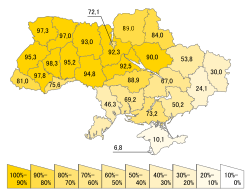 Map showing prevalence of Ukrainian as a mother tongue, according to the 2001 census. The Crimean peninsula is at the bottom right, the tiny part with 6.8% is Sevastopol. Also note the sharp uptick between oblasts such as Donetsk (24.1%) and Dnipropetrovsk (67%)[4]

Ukraine was about to sign an Association Agreement with the EU, but Victor Yanukovych (Yushchenko's former opponent, who was elected President in 2010) cancelled preparations for it on November 21, 2013, causing a wave of protests known by a Twitter hashtag, Euromaidan (a portmanteau of "Europe" and Maidan Nezalezhnosti, translated as "Independence Square," the main square of Kiev). The situation escalated — every attempt at forcibly suppressing the protests caused them to intensify, becoming a hotbed for pro-Europeanists and nationalists alike.[5] As demonstrators occupied government buildings, clashes between protesters and riot police backed up by "Berkut" special forces led to snipers killing opposition activists.[note 2] Ultimately, Yanukovych signed a compromise deal to restore the 2004 constitution on February 21[6] (the fact that the larger Ukrainian Army refused to participate in gunning down protesters being a major factor in this decision) and then fled without formally resigning his post, leaving Chicken Kiev fans jubilant. At least until it was revealed that he'd embezzled significant amounts of money from the Ukrainian treasury, and took the cash with him when he fled. He has since reappeared in Russia, maintaining that he is still the legitimate President of Ukraine and that his removal was an illegal coup d'état. You can bet some Ukrainian hryvnias (and a galleon[7]) what's the position of Russia.

Ukraine was not undivided in its opposition to Yanukovych's government. As a general rule, the protests received more support in the western parts of Ukraine, while the more pro-Russian eastern parts, which also contain more ethnic Russians[note 3], saw counter-protests in support of Yanukovych and even open calls to sedition joining Russia. One of the peaks of these sentiments was the Autonomous Republic of Crimea: its "special status" city of Sevastopol includes a major sea port and a Russian naval base.[note 4]

The situation got worse after Yanukovych's re-emergence in Russia. Inter-ethnic tensions were exacerbated by a push by the remaining Ukrainian parliament to repeal a controversial 2012 law on regional languages[note 5] that in effect had made Russian the official language in regions recognized as predominantly Russian. The acting President vetoed the repeal, but the damage was already done.

Vladimir Putin then invaded, with militia and soldiers seizing Crimean parliamentary buildings and installing a pro-Russian prime minister, and a referendum to secede from Ukraine (widely denounced as a sham[8], especially considering the "Russian Bloc" party which was installed as the new leaders of Crimea never reached more than 3% before the Russian intervention) passed by 97% on March 16.[9] By April, separatists stirring shit up in the rest of the country were able to establish an insurgency in the easternmost oblasts of Donetsk and Luhansk (collectively known as the Donbass); in the coastal city of Odessa, a confrontation between pro-Russian and the pro-Ukrainian activists resulted in 42 pro-Russians dying in a fire at a trade union house.[10]

Long story short: on June 27, the crisis went full circle with the newly-elected President Petro Poroshenko signing the Association Agreement (alongside Georgia and Moldova),[11] a civilian airliner was shot down, and once it was clear the Ukrainian army would succeed in a bloody summer counter-offensive, over 3,000 Russian troops moved into the Donbass on August 28 in an attempt to freeze the conflict.[12] On October 26, the first parliamentary elections since the revolution decimated Yanukovych's Party of Regions in favour of pro-European reformers.[13]

It appears this entire escapade doesn't really make any sense in the long term for the Kremlin (both at the cost of supplying the annexed territory and global geopolitical risks[14]), leading some to speculate that Putin may be losing it.[15][16] Even China, at a time when Putin desperately needs allies, has been partying[17] ...ahem, notably silent.[18]

Nonetheless, President Petro Poroshenko's penchant for shelling civilian targets,[19] cutting off their water and social supplies,[20] and blocking attempts at reform from parliament shows that this isn't solely a black-and-white issue; increasingly black-and-black, honestly, which has contributed to the massive humanitarian crisis within Ukraine.[21][22][23] There are multiple instances of beatings, abductions, and possible executions of local residents by Ukrainian troops.[24][25][26] Amnesty International noted that Kiev's volunteer "territorial defence battalions", such as the Aidar Battalion

, are increasingly blocking humanitarian aid into eastern Ukraine.[27][28] Similar concerns have been raised about Oleh Lyashko

and his militia.[29] Human Rights Watch noted that Ukrainian government forces and pro-government paramilitaries used unguided, indiscriminate Grad rockets against civilian areas. Amnesty International dug up several incidents of summary executions by Kiev's forces as well.[30][31][32][33] Poroshenko's siege tactics on insurgent areas also disproportionately affect civilians.[34][35] And of course, the insurgents have been known to abduct and torture pro-Kiev Ukrainians, destroy medical equipment, threaten medical staff, and occupy hospitals while taking hostages.[36] Oh, and there's also Poroshenko's lack of will to target the oligarchs — since he is himself an oligarch.[37] Meanwhile, the government has issued bans against 41 international journalists who are considered pro-Russian, which inexplicably includes three BBC journalists and two Spanish journalists missing in Syria.[38] Trolls affiliated with SBU harassed and sent death threats to a number of Ukrainian journalists who were accused of treason due to their attempts to cover war on both sides.[39]

Prime Minister Arseniy Yatsenyuk isn't much better, what with his hard-on for austerity, which includes eradicating education, healthcare, unemployment benefits, and social programs in general in exchange for enriching the oligarchs who helped fund his campaign.[40][41] And though sources like RT have been exaggerating the role of the far-right groups (including the Right Sector

) in the civil war, they are agitating the conflict unnecessarily. Unfortunately for all involved, it appears that the far-right groups are growing in influence with the actual Ukrainian army.[42] Their latest antics include committing war crimes in the separatist-held territories,[43] assaulting a gay pride march in Kyiv,[44] and most recently, disrupting an LGBT festival in Lviv.[45] Moreover, the Ukrainian government recently introduced a blanket ban on Russian social networks, prompting fury among Ukrainian users and reinforcing concerns that Poroshenko may be using anti-Russian rhetoric as a way to divert attention from the country's inner problems (such as corruption, which is government's direct fault).[46][47] In the words of Francis Malige, the Director of the European Bank for reconstruction and development in Eastern Europe and the Caucasus, fighting corruption in Ukraine is like sport fishing: "caught, photographed, released".[48] Further controversy was drawn by hastily introduced decommunization laws which effectively outlawed communist symbols, parties and expressions of support in the country, while at the same time glorified the Ukrainian Insurgent Army

into becoming national heroes, despite their notorious collaboration with Nazis and massacres of ethnic Poles

.[49] For instance, a street in Kiev was renamed after the Ukrainian nationalist Roman Shukhevych

who had been a collaborator with Nazi Germany and one of the organizers of anti-Jewish and anti-Polish ethnic cleansings.[50] The country is also becoming a refuge for Islamists outlawed in Russia and EU countries.[51]

Sick of being dicked around by the major parties backed by corrupt oligarchs, in 2019 the Ukrainian peopled voted out Poroshenko and voted in Volodymyr Zelensky

, an actor with little political experience who campaigned on the platform of anti-corruption. Before becoming the current President of Ukraine, Zelensky was the star of the hit TV series Servant of the People

, which funnily enough, is about an inexperienced teacher who unexpectedly becomes the President of Ukraine following a video railing against government corruption going viral. Americans may also know Zelensky from Donald Trump's attempts to blackmail him for dirt on Joe Biden and his son.

Ukraine is sometimes called "the Ukraine," which annoys the Ukrainians, although this practice is dying out.[52] The reasoning for this is based on etymological debates over the origins of the word Ukraine: a popular version is that it comes from a Slavic word corresponding to "frontier" or "borderland"[note 6] — hence the ukraine ("the borderland"), although Ukrainians themselves would call the borders "kordony", and the borderland "okolytsia". A similar division manifests as Russians prefer using "на Украине" (on the Ukraine) instead of "в Украине" (in Ukraine). It's a manufactroversy, really, but you can think of "Ukraine" as referring to the country, and "the Ukraine" as referring to the region.