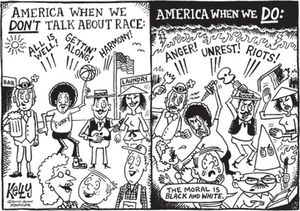 How it happens, according to The Onion.

Colorblindness is the refusal to acknowledge racial identity and the significance of race. It is ostensibly rooted in a desire to eradicate racism, treating the concept of race as a form of bigotry that only perpetuates racism. Similar behavior exists for other axes of oppression as gender-blindness, sexual-orientation-blindness, etc. However, critics claim that colorblind policies contribute to racism rather than ending it.

The problem is that it is based on the assumption that problems will disappear if they are ignored. In extreme cases, a person who appears to be behaving in a racist manner may tell the person noticing their racist behaviour "you're the real racist!" as if labeling antisocial behaviour is worse than the antisocial behaviour.

While in an ideal world, to quote Bob Marley, the "colour of a man's skin is of no more significance than the colour of his eyes," [1] in the real world, racial identity remains a key determinant of the quality of a person's life. Colorblindness provides easy cover for people to claim that in a "post-racial" society, the social effects of racism (such as lower incomes, increased rates of incarceration, police violence directed at particular groups) are the fault of the victims, and not evidence of how racism is still very much alive.

An example of this tendency in action was the move to counter the rise of Black Lives Matter with "All Lives Matter". While this appears to be a call to treat all people equally, it in fact obscures the potentially and often violent racism specifically targeting African-Americans that spawned the sentiment in the first place.[2]

The problem with claiming colorblindness (and its equivalents) is that in practice, it leads to more marginalization. The racial elite of an area can easily be privilege-blind, whatever good intentions they have, and can be unwilling — perhaps even unable — to recognise the problems of those outside their own advantaged group. If such problems are not addressed they will persist.

Colorblindness is a good virtue for the truly post-racial future. But the present isn't ready for it yet.

Colorblindness at it refers to race should not be confused with the medical condition that impacts how a person perceives the visible spectrum.