Rastafari, also known as Rastafarianism, is a religion that started in Jamaica in the 1930s. Although the faith was marginalised for decades, it became popular worldwide as people became turned on to it through the music of its most famous practitioner, Bob Marley.

Some of the fundamental tenets of Rastafari include:

Rastafari's more fundamentalist strains can be extremely sexist, racist, moralistic and deeply homophobic.[1] Anti-papism is also widespread, due at least in part to Mussolini's treaty with the Vatican and his war of aggression against Emperor Selassie's Ethiopia.[2] Rastafarians are highly critical of Western society, regarding it as decadent, corrupt, and sinful, and describing it as "Babylon", a name which appears in many reggae lyrics. Rastafarianism is also Afrocentric, identifying black Africans, particularly ethnic Ethiopians, as the descendants of the biblical tribes of Israel. Some Rastafarian sects and movements have been explicitly black supremacist,[notes 1] while other Rastas, such as Marley, reject the religion's racial aspects. 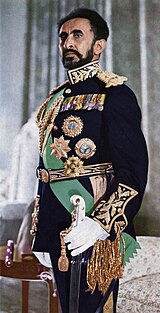 In the 1930s, Haile Selassie was the only black(ish) ruler of any significance in all of Africa, from a family that has claimed to be descended from King Solomon through unique interpretations of the Bible.[3] As such, he was pretty much the only choice for the Rastafaris to choose as their mascot. He himself was an ardent Christian and explicitly denied his divinity, much to the Rastafaris' chagrin. In 1974, after years of mismanagement and corruption, his own military staged a coup and had numerous high-ranking officials executed by firing squad. He proved himself to be very much mortal, being strangled to death by former military leaders.[4] The official cause of death was "respiratory failure following complications from a prostate exam", and "respiratory failure" does technically include "being strangled to death". Try not to think too much about what the "prostate exam" is a euphemism for.

Many Rastas refuse to believe he actually died, or that he wasn't the greatest ruler ever.

Bob Marley was a seminal reggae musician, and was largely responsible for the spread of Rastafarianism beyond Jamaica.

Marley was born in Jamaica to a mixed-race couple. His father claimed to be Jewish, though Marley himself would not be and he was raised Catholic. Breaking from that tradition, and in part wondering about both his Jewish and African roots, he turned toward Rastafarianism.

Marley died from cancer in 1981 at the age of 36. After receiving his diagnosis, he refused the recommended procedure of amputating his cancerous toe, citing his Rastafari faith, which decrees that that which Jah (i.e., Jahweh) has made cannot be undone by man. He also rejected conventional treatment and instead sought treatment from a practitioner of alternative medicine named Josef Issels. He died less than a year later. The Issels treatment involves diet, laetrile, chelation therapy, and the removal of fillings from the patient's teeth. Marley's decision to seek an alternative medicine treatment for his cancer did not come from nowhere, as one of the Rastafarian beliefs is that of seeking "Livity",

a concept comparable to vitalism.

His death has also been the subject of numerous conspiracy theories. The most common one claims that the CIA killed him.[5][6] This of course ignores the cancer diagnosis and all, and if the cancer was a CIA plot, "give someone treatable cancer" has to be among the dumbest ways to assassinate someone, somewhere around "mail them bacon and hope they get heart disease". This also ignores that the CIA isn't allowed to operate on US soil, at least officially; that's the FBI's job, and the FBI is certainly not going to allow another agency to muscle in on their territory, because that's how agencies get their funding cut. Then again, Marley lived in Jamaica, which, pace Colin Powell, does not count as US soil...

This religion-related article is a stub.
You can help RationalWiki by expanding it.
Retrieved from "https://rationalwiki.org/w/index.php?title=Rastafari&oldid=2513328#Bob_Marley"
Categories:
Hidden categories: