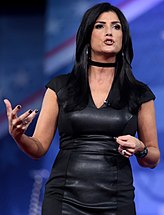 Loesch speaking at the 2017 CPAC in Maryland.

Dana Lynn Loesch (née Eaton; pronounced like "lash") (1978–) is an American right-wing political commentator, activist, gun nut, and pundit who served as the spokeswoman of the National Rifle Association. She had formerly been an editor for Breitbart and had also been the host of her own eponymous program, Dana, on TheBlaze. She also co-founded the St. Louis branch of the Tea Party in 2009.[1]

Loesch was, from 2017 to 2019, easily the NRA's most visible mouthpiece. Her propaganda-style rants in the NRA's television (NRATV) and social media ads plus her numerous appearances on cable television (she's made appearances on almost every network you can think of, from Fox News to CNN) showcase just how cult-like the NRA has sadly become.

Loesch actually used to be a Democrat, working on Bill Clinton's re-election campaign in 1996.[2] However, she became disillusioned with the Democratic Party following the Monica Lewinsky scandal and 9/11 and became a Republican.

See the main article on this topic: Crank

Loesch very quickly immersed herself in conservative politics in the 2000s, starting as a simple columnist for St. Louis Magazine. However, she would quite quickly graduate to the world of conservative talk radio, getting her own nationally syndicated radio show (called The Dana Show: The Conservative Alternative) on Radio America in 2008.[3] She caught the eye of Andrew Breitbart in 2010 and was appointed editor-in-chief of his website, Big Journalism.

Loesch was hired by CNN in February 2011 to serve as a political analyst for the 2012 presidential election.[4]

Loesch joined TheBlaze in January 2014 to host her own show, Dana. She remained with TheBlaze until November 2017.[5]

She initially supported Ted Cruz during the 2016 presidential election, but following Donald Trump's election victory, she became a vociferous defender of the Trump administration.[6]

Loesch became a high-ranking official and spokeswoman for the NRA in 2017. Officially, she is recognized as "Special Assistant to the Executive Vice President for Public Communication."[7]

Loesch has perfected the unique brand of NRA fearmongering that her boss Wayne LaPierre pioneered in the late 1990s and early 2000s. One particular video that first came out in June 2017 has her saying the following:

Well, that is damn terrifying, and borders on fascism. Multiple sources, including Black Lives Matter, former Obama speechwriter Jon Favreau (not the Iron Man director), and U.S. Senator Chris Murphy, condemned the video, claiming that it was promoting violence against liberals[8][9], and a petition was started to have it removed from Facebook. Even some fellow Republicans were offended.[10] Loesch has, of course, defended herself, claiming that she was condemning violence, not condoning it, and that she was not at all promoting violence against anyone.

She rendered her arguments null and void when she appeared in a second video:

So, first, she totally doesn't advocate violence against liberals, and now, in a rant that is chock-full of half-truths and straight-up bullshit, she totally isn't making actual violent threats against free press.

The NRA shut down its "NRATV" arm in June 2019, with the organization dismissing her as spokeswoman. However, she continues to spew out her wingnuttery on her daily radio show, which in 2021 expanded its coverage as many stations picked it up as a replacement for Rush Limbaugh. She also bitches on Twitter about how wingnuts like her are being "silenced" and says "God bless" to anyone who criticizes her views, then (usually) blocks them. She is married to Chris Loesch, who is just of a gun nut and wingnut as her, also sending their Twitter brigade after anyone who calls them out.

See the main article on this topic: Wingnut