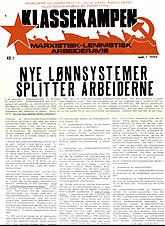 Cover of the first issue

and its predecessors. It was historically a Maoist periodical and later a newspaper owned by the Workers' Communist Party (Norway)

(AKP). In recent years it has faced criticism by scholars and mainstream media for sometimes promoting anti-"globalist" conspiracy theories, for being "Putin's Norwegian parrots"[1] as well as for promoting transphobia.[2] This, and particularly the transphobia, has made the newspaper controversial on the Norwegian left, even among many members of the Red Party. The newspaper was founded by Pål Steigan, who later also founded Steigan.no, a "red-brown" conspiracy theorist website.

It was founded as a monthly Maoist periodical by a self-described "group of marxist-leninists" with Pål Steigan and Tron Øgrim as key figures in 1969.[note 1] It eventually became the newspaper of the Maoist Workers' Communist Party (Norway)

(AKP), and during Pål Steigan's tenure as leader of AKP it was developed into a daily newspaper in 1977. As the newspaper of AKP Klassekampen toed the Maoist party line. It was under the control of AKP's central committee which directly edited certain sections of the paper to promote the party's positions. It was the party's official newspaper until 1991 when it was rebranded as an independent left-wing newspaper, albeit owned by AKP. AKP eventually merged with the Red Electoral Alliance, itself an AKP offshoot, to form the Red Party, which remains a shareholder.[4]

It has often maintained an anti-Western stance, often engaging in the practice of whataboutism, particularly in response to criticism of countries like Russia, Venezuela or Cuba. Following Russia's invasion of Ukraine in 2022, the political editor of Dagbladet

wrote that Klassekampen got its coverage of the events of the Russo-Ukrainian War that led to the invasion "most consistently wrong" and asserted that the paper continued to publish "third rate conspiracy theories" of the "crackpot left" even after the invasion.[5] The paper was described as "Putin's Norwegian parrots" by Norway's largest newspaper Aftenposten.

[1] An editorial from the same newspaper from November 2022 stated that "before the invasion, Klassekampen went to great lengths to dismiss concerns that there was any threat from Russia against Ukraine. Now the newspaper chooses to downplay the danger that Russian manipulation of Western democracies poses."[6] The political editor of Dagens Næringsliv

Frithjof Jacobsen wrote that Klassekampen's former editor Bjørgulv Braanen was among those who had espoused "rigid anti-Americanism" and "whose voices we do not need to listen to any more."[7] However, the paper does not support the Russian invasion, and has also expressed solidarity with Ukraine.

The paper has also been criticized for several years by representatives of the LGBT+ community for its coverage of transgender people. Gender studies scholar Janne Bromseth

noted that "the radical left-wing newspaper Klassekampen has published regular columnists who have voiced transphobic views for a long time."[2] It has published several TERF writers including Kajsa Ekman (who is also published by Steigan.no) and several representatives of the TERF group Women's Declaration International

(WDI). Writer Mohamed Abdi said that Klassekampen has knowingly promoted and normalized hate against a small and vulnerable group.[8] In 2020 and 2021 many in the LGBT+ community in Norway cancelled their subscriptions due to the paper's anti-trans articles.[9][8] Journalism researcher Jon Martin Larsen

argued that the paper was trampling on transgender people and inciting hatred against them.[10][11] The newspaper's editor Mari Skurdal, who has previously defended J.K. Rowling's views on trans people and referred to WDI as "women's rights advocates," has denied that the paper is transphobic[12] and complained about "cancel culture" due to the criticism of the paper's anti-trans articles.[13]