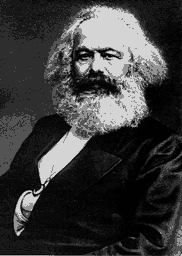 Karl Marx was well insulated against the harsh German winters.

Das Kapital is a foundational theoretical text in materialist philosophy, economics and politics, co-written by Friedrich Engels and Karl Marx. Its full title in German is: Das Kapital: Kritik der politischen Ökonomie, and in English is Capital: Critique of Political Economy.

While verbose, It could have been bigger—Marx planned six books, but only really completed one before his death, with Engels using uncompleted manuscripts to complete two, three and four.

Volume I of The Capital critically analyzes political economy and characterizes its development over a long period of time. It also reveals the contradictions of the capitalist mode of production, how it was the precursor of the socialist mode of production and of the class struggle rooted in the capitalist social relations of production. It was published on 14 September 1867 and was dedicated to Wilhelm Wolff and was the only volume of The Kapital to be published in Marx's lifetime.

Volume II of The Capital was prepared by Friedrich Engels from the notes left by Karl Marx and published in 1885. The focus in this volume is shifted from the sphere of production of commodities to the sphere of their circulation. It is also explains how how value and surplus-value are being realized.

Volume III of The Capital is also written by Engels from the Marx's notes and was published in 1894. Marx confronts his fundamental irresolvable problem in this volume. Engels considered Volume 3 the most important of the volumes of Das Kapital.[1]

The book's main idea is the Labour Theory of Value - the value of a commodity can be objectively measured by the average number of labor hours required to produce that commodity. The book also introduces Historical Materialism, which is the analysis of history through looking at the economy and the search for and the usage of resources. Historical Materialism was a modified version of Hegel's dialect theory, which was given the name of "Dialectical Materialism" NOT by Marx, but a German philosopher called Joseph Dietzgen. Dialectical Materialism is the jargon-heavy part of Marxism's theory that deals with the theory of nature and how nature is always moving- as in, nature is always changing, which means mankind is always changing, which then leads to the conclusion that society is always in flux, thus justifying potential radical changes as "natural" and thus good.

Marx himself in the French introduction of the book does acknowledge that the length of the books may put people off. Reviews of the book have been somewhat mixed, with some people like Ernest Mandel singing songs of praise for the book, while others have disagreed with the ideas inside. However, the impact of the book itself on the standards of worker conditions and the many labor and political movements it inspired cannot be denied.

Marx spent his entire life putting off finishing this book. Francis Wheen's biography makes it clear that, besides being a bit of a genius, he also was a bit of a procrastinator. He was prone to nasty carbuncles that made him finish the book standing up. He had squandered all chances for ever becoming a tenured professor in Germany by aligning himself with the most radical professors of his day and writing newspaper articles agitating for all sorts of concepts.

After participating in the 1848 revolutions in Europe, Marx was exiled to Soho, London, while Engels ran his father's textile mill in Manchester. Marx told Engels to send him all his accounting and production figures, which formed a major backbone for his research. Marx also constantly exchanged letters. The original idea for the book came in 1855 when Engels prompted him to get all his ideas out in one big go. After writing the Table of Contents for each volume, he spent twelve years smoking bad cigars, hellraising with drinking buddies, lecturing union halls, and writing newspaper articles, along with every other excuse in the book.