The abbreviation CP does not just stand for child pornography and Conservapedia. It also stands for copy/paste. Primarily, sysops do this (because they are the ones immune from the hand of justice) to save themselves work by using the copy-paste function on the computers. If users are the ones accused of plagiarizing, they are banned, but Conservapedia retains the article.

The wonders of the internet that have enabled Conservapediaheads to plagiarise so much content, also make it easy to spot such dishonest behaviour; simply highlight a block of text in a 'normal' CP article and search for it using your favourite search engine. More often than not the entire text is ripped from somewhere else.

Here is a very incomplete yet still long list of occurrences. In addition to intellectual integrity, academic honesty and copyright law, Conservapedia Commandments 1 and 2 are relevant here.

Memo to Andy Schlafly: Plagiarism is a sin – and potentially illegal.

Articles with copious amounts of plagiarism[edit]

These are images that are copyrighted, used without apparent permission, and with no obvious "fair use" justification. 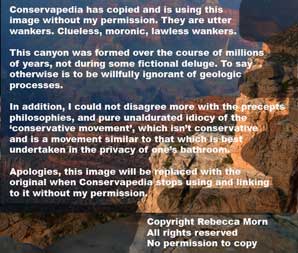 A picture of the Grand Canyon uploaded by Joaquin with the qualification "Fair Use" was overprinted at the source site with a rebuttal of that justification. It was deleted from Conservapedia!

The Conservapedia article on the Republic of China is copied almost entirely from the U.S. State Department article. Because works of the State Department and other agencies of the United States Government are not copyrighted, it isn't strictly required to cite the source, but failure to cite shows bad faith. A few sections were rewritten by editors who actually knew what they were talking about and have since left the site.