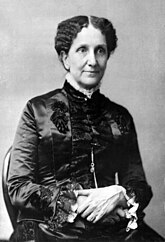 Mary Baker Eddy (1821–1910) was the discoverer and founder of Christian Science and the author of its guidebook Science and Health with Key to the Scriptures. It claimed that, by understanding how we were merely the reflection of God, we could remove our injuries and diseases. She did not quite believe that things such as disease did not exist, as is often said, merely that spiritual methods were preferable to rational ones.

Christian Science "reading rooms" dot the United States and several other countries, locations where the religion's theological claims may be studied and meditated upon.[1] They are also established online.[2] The Boston-based Christian Science Monitor is a globally-respected newspaper and has won numerous awards for its journalism, including many Pulitzers.[3]

In many ways, however, the church Baker Eddy founded is the largest collection of faith healers on the planet. Christian Science parents have lost their children to medical neglect and come to rue the faith,[4] and some have been successfully prosecuted for manslaughter[5] or reckless homicide.[6] So, this grandmotherly looking lady has a lot of blood on her hands, as she encouraged medical neglect among her followers.

This religion-related article is a stub.
You can help RationalWiki by expanding it.
Retrieved from "https://rationalwiki.org/w/index.php?title=Mary_Baker_Eddy&oldid=2447434"
Categories:
Hidden categories: