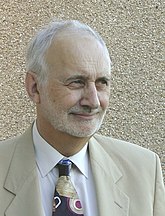 Steuart Campbell (1937–) is a British writer on skeptical subjects, including debunkings of UFO sightings, the Loch Ness Monster, and Christianity. In most cases his method is to run through alleged sightings of a supposed mysterious phenomenon and provide rational explanations for each occurrence, thereby demonstrating the implausibility of the claimed supernatural phenomenon.

He was born in Birmingham, England but has lived in Edinburgh for many years.[1] He is (as of 2019) Secretary and Treasurer of the Edinburgh Secular Society.[2]

This considers claims that Nessie, some kind of monster, inhabits Loch Ness in Scotland. He runs through a long list of individual sightings and considers possible explanations, including otters, floating logs, ripples, seiches (layers of different-temperature water), fermented sawdust, and pranksters. The List called it "concise, readable, and exhaustive".[3]

This sets out to explain how most UFOs actually have scientific causes, such as weather, mirages, and stars.

He has said on the subject of UFOs, "After 30 years' investigation, I've never found myself unable to explain a UFO report. People are largely ignorant of astronomy and meteorological optics and tend to prefer exotic explanations, perhaps derived from The X-files. Even professionals like pilots are deceived by simple things like the planet Venus."[4]

This investigates the historicity of Jesus. He claims that Jesus did exist but was born in Galilee (but not in Nazareth), and the Biblical story was vastly exaggerated for effect.[5]

This investigates conspiracy theories around the 1994 Scotland RAF Chinook crash.

On 2 June 1994, an RAF Chinook helicopter crashed on the Mull of Kintyre in southwest Scotland while carrying a lot of senior intelligence experts with knowledge of Northern Ireland. Conspiracy or cock-up? Campbell blamed the crash on pilot error, with the pilots flying into cloud but failing to climb, and therefore hitting the ground.[6] Since then, the pilots have been cleared of charges of negligence, following revelations that there may have been a technical fault in the helicopter's navigation and communications systems and the craft may not have been airworthy: there have been calls for further inquiries. But while acknowledging that the exact cause is not known, Campbell stuck to the theory that pilot error was largely responsible despite the opposition of many with military connections who refuse to believe that air force pilots could ever make mistakes.[7][8] At any rate, the more outlandish theories should be ignored.

He has also appeared in various television documentaries, including the self-explanatory History's Mysteries: The Loch Ness Monster (2006), discussing UFOs in The West Lothian Question (2004), UFOs again in Strange But True? (1994 and 1997), more Nessie in Encounters: The Secrets of Loch Ness (1995), and visions of the Virgin Mary in Mysterious Universe (1994).[9]

He has written many shorter articles, and is also a frequent writer of letters to newspapers, often attacking climate change skeptics, commenting on nuclear power, lamenting the decline of the English language, and defending his various rationalist ideas/promoting his books.