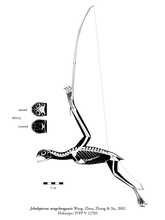 David Peters (c. 1955–)[1] is essentially what happens when someone tries to be a paleontologist, but the only thing they know how to use is Photoshop and a good deal of spite towards people pointing out why they are wrong. Starting off in a more or less promising career during the 1990s, where he illustrated children's books about prehistoric life, David Peters went off the rail somewhere in the early 2000s,[2] when his highly dubious non-peer-reviewed meeting abstract about the pterosaur Jeholopterus was published, the abstract claimed that there was a bizarre bipedal creature with frills and a long tail as well as vampiric fangs.[3][4] A few more deranged illustrations of pterosaurs as mohawk lizards later and it became clear that he was insane.

As of 2012 he began to operate a site called ReptileEvolution.com. Cropping highly on Google searches, several actual paleontologists have seen fit to warn off onlookers.[1][2][5][6]

David Peters simply put disregards functional paleontology. On the best days, he looks at fossil pictures and interprets the squashed remains as accurate. On several occasions he straight up uses Photoshop and makes up drawings.[2] Combined with his surreal choice for colour markers, this results in frankly creepy diatribes on things that aren't there.[2]

Peters's primary technique for justifying his unorthodox interpretations of fossils is what he calls Digital Graphic Segregation using Photoshop.[2][5] It's a sort of digital-pareidolia because it is not confirmed by other techniques (e.g., CT-scanning or UV light) and is not used by any paleontologists.[5]

As noted above, he is infamous for his depictions of pterosaurs as aberrant bipedal creatures with back frills and erect tails. He disregards several studies in recent years demonstrating pterosaurs to be quadrupedal, furry flyers in favour of bird-lizard hybrids.

His phylogenetic work leaves a lot to be desired as well. He has built what he calls the "large reptile tree" (a cladogram), which is basically the result of ignoring all types of established synapomorphies in favour of randomly pairing things together.[5] Paleontologist Darren Naish, has said that Peters has failed to even understand cladograms.[5]

Starting with the comments section on the Tetrapod Zoology article, his behaviour is noted as being more erratic and unpleasant, which has not endeared him to the paleontological community at large.[5]

Peters has at least twice compared his current exclusion from professional scientific discourse to racial segregation, a false analogy akin to Godwin's Law.[1][7]

As of 2016 Peters appears to have started focusing more on mammals over his preferred reptiles, possibly in response to a speculative post on volaticothere eutriconodonts.[8] The results are just a wacky, not in the least because they're all defined in relation to hippos:[9]

Some of Peters' controversial art[edit]