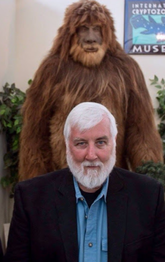 Loren Coleman (1947–) is an American pseudoscientist, cryptozoologist, and paranormalist writer. In the 1970s, Coleman promoted the dubious "psychic projection hypothesis." In the 2000s, he converted to naturalistic explanations within cryptozoology, but his work promotes known and probable hoaxes, including the Patterson-Gimlin film

Coleman believes Bigfoot is real and also believes in the Loch Ness Monster.

Because so few self-described cryptozoologists have academic qualifications, Coleman has been described as having "more credibility than most" of those who write on the same subject.[1] This is despite his expertise is in social anthropology and psychiatry, having worked as a consultant for the Maine Youth Suicide Program for nearly a decade.

Coleman has appeared in many TV series dedicated to "unsolved mysteries" and cryptozoology, including:[2][3]

Coleman in the 1970s co-authored two books with Jerome Clark, The Unidentified: Notes Toward Solving the UFO Mystery[4] (New York: Warner Books, 1975) and Creatures of the Outer Edge (New York: Warner Books, 1978). These books suggest that UFOs, ghosts and cryptids such as Bigfoot can be explained by human thoughts that somehow take on physical forms and psychokinesis — the psychic projection hypothesis. The hypothesis is pseudoscience and is untestable, not to mention it being extremely far-fetched:

Clark and Coleman write that Bigfoot, UFOs, psychic phenomena, apparitions, the eastern panther, and poltergeists are all what they term "borderline phenomena" (Clark & Coleman, 1978, 19) They write "Whatever the source may be its signals must be filtered though human consciousness and perception, which shape the manifestations to conform to certain archetypal forms that are both strange and yet oddly familiar to us. Strange because they appear supernatural or extraterrestrial, but familiar because, in a sense, we have created them."[4][5]

A criticism of the psychic projection hypothesis by physicist Illobrand von Ludwiger is — if humans are able to project immaterial thoughts to the material world why the hypothesis simply doesn't include more ordinary and mundane things: "Why are there no psychic projections of cars, television sets, computers, etc., which are much more prominent in everyone's subconscious mind?"[6]

In their 1978 book Coleman and Clark suggested that many "Manimals" (humanoid creatures) are either apparitions that haunt certain forest regions or are psychic projections from the mind of the viewers.[7]

Coleman's views frustrated "flesh and blood" cryptozoologists like John Green, who rejected paranormal explanations and favoured only the naturalistic idea that Bigfoot is an elusive primate species. Kenneth Wylie in 1980 noted Coleman made Green look like a "reputable scholar" in comparison.[8]

Coleman himself admits he has been "partially responsible for the amalgamation of Bigfoot and UFOs".[9]

In the Skeptical Inquirer, Robert Boston suggested that "Clark and Coleman are every bit as gullible as Krantz,

but at least they know how to spin a monster yarn so that the reader gets an occasional chill".[10]

In the early 2000s, Coleman shifted his viewpoint from paranormal explanations for Bigfoot to naturalism within cryptozoology and now calls himself a "flesh and blood cryptozologist"[11] in the vein of John Green. Concerning his 180-degree turn, Coleman has commented: "But today, having reclaimed the firmer zoological and anthropological foundations of hominology, I reject such notions [the amalgamation of Bigfoot and UFOs]."[12] Having become sceptical of UFO-Bigfoot claims and paranormal explanations for cryptids in general, Joe Nickell in 2011 described Coleman “the best of a bad lot."[13]

Loren Coleman deserves credit for popularising and in some sense legitimising the paranormal angle in Bigfoot research, despite his recent conversion to naturalistic explanations.[14]

Despite his conversion from paranormal to naturalist explanations within cryptozoology, Coleman's books have been criticised for relying too heavily on eyewitness testimony and providing no reliable physical evidence.[15]

Coleman is not only open to the possibility of Bigfoot existing, but is a believer, writing for example in the introduction to his book Bigfoot! The True Story of Apes in America (2003), "One day Bigfoot will be recognised as a living creature". He primarily bases his belief on the Patterson–Gimlin film, footprint casts and eyewitness testimony. Sceptics however question the reliability of the latter, while most experts dismiss the Patterson-Gimlin film as a hoax.

In 1999 (republished in 2006) Loren Coleman co-authored with Patrick Huyghe "The Field Guide to Bigfoot, Yeti, and Other Mystery Primates Worldwide." The book was negatively reviewed by Benjamin Radford in the Skeptical Inquirer.[16] Radford criticises Coleman for "lax scholarship", for example, Coleman supports probable hoaxes:

Even the infamous Minnesota Iceman, a fair exhibit shown in the late 1960s and claimed to be a frozen Bigfoot, appears in the book. It's touted as a real creature, despite strong evidence that it was simply a rubber creature designed by a top Disney model-maker. As Jon Beckjord, director of Project Bigfoot, wrote in the Summer 1982 issue of Skeptical Inquirer, "I'd like to point out that nobody who is involved in Sasquatch investigations has ever felt that this frozen dummy was a Bigfoot. . . ." That doesn't stop Coleman and Huyghe, who quote one cryptozoologist's bizarre theory that "it was a Neandertal killed in Vietnam during the war and smuggled into the United States in a 'body bag.'"