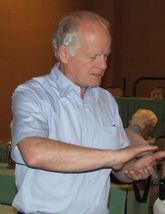 David N. Talbott (1942–) is a self-taught comparative mythologist and long-time promoter of neo-Velikovskian nonsense. Inspired by Immanuel Velikovsky (1895–1979), Talbott uses ancient mythological tales as evidence (his so-called proof) that Earth was at one time in orbit around Saturn (within recent human memory, no less) and a litany of other equally-ridiculous claims.[1]

Talbott, along with fellow shyster Wallace Thornhill, is directly involved with the day-to-day operation (the business/money side) of the Electric Universe (a cult that masquerades as science[2]) peddling incredulous books and DVDs and holding exorbitantly-priced workshops and conferences — in short, fleecing the gullible.[3][4] Talbott also runs the Thunderbolts Forum website; a recruitment center for new pockets to be picked.[5]

Talbott received his B.S. from Portland State University where he majored in education and political science. He also completed a year of graduate work in urban studies.[6] He was the co-founder and publisher (with his brother Stephen L. Talbott as editor) of the journal Pensée (Immanuel Velikovsky Reconsidered) produced by the Student Academic Freedom Forum in Portland, Oregon, which between 1972 and 1974 published a ten-issue series, Immanuel Velikovsky Reconsidered, achieving a circulation of between 10,000 and 20,000 subscribers.[7]

He is the author of several books related to comparative mythology and alternative histories of the solar system, including The Saturn Myth.[8] In 1987,[note 1] he founded the journal Aeon, where many of his works are self-published.[9] In 1991, despairing of ever finding a physical solution to the "Polar Configuration", Talbott abdicated his life's work for eighteen months. The sabbatical ended when he was shown a model which, according to his interview in the documentary Remembering the End of the World, "wasn't a complete answer; but it gave me confidence that the dynamical issues could be resolved." Talbott returned to the staff of Aeon in May 1994.[10] In November 1997, he became the founding president of The Mind Exploration Corporation whose mission is "to identify, investigate and market groundbreaking discoveries on the frontiers of science, technology and human understanding" that follow from the dual concepts of the "Polar Configuration" and the "Electric Universe".[11] In early 1999, he announced a relationship with Atlantis Rising magazine "to develop up to eight pages for each issue."[12] He was an invited speaker as "scientist and author" at the "Earth Changes 2000" Conference, Sept. 8-10, in Emigrant, Montana, sponsored by Atlantis Rising and Ancient American magazines[13] where he "use[d] computer animation to argue that the ancients witnessed the catastrophic collision of planetary bodies including Earth and left the record in myths and legends."[14]

Originally inspired by Velikovsky, Talbott envisioned a congregation of planets physically close to the Earth in ancient times in which "the five planets Jupiter, Saturn, Venus, Mars and the Earth orbited the Sun as a single linear unit, which rotated about a point close to Saturn, before its break-up at the end of the Golden Age".[15] He claims that the violent evolution of this "Polar Configuration" provoked the myth-making epoch of human history.[16] Professor of Social Theory Alfred de Grazia, noted that Talbott was one of several scholars who had "entered the full stream" of Velikovsky's work.[17]