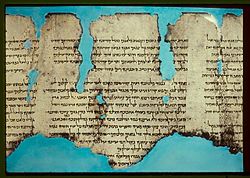 , yet another prophecy of an apocalyptic battle between Dark and Light.

The Dead Sea Scrolls (or Qumran Caves Scrolls) are a collection of manuscripts found in the eastern Judaean Desert in the West Bank in 1946/47 and in 1956. They relate to Judaism and are written mainly in Hebrew, with some in Aramaic and Greek. They appear to date to a period from the 3rd century BCE to the 1st century CE, and are generally reckoned to have belonged to a group of Essenes, a sect of Judaism whose members tried to live an ascetic life.[1] The assignment of the scrolls to the Essenes relates partly to records of their presence in the area, but also to the discovery nearby of what appear to be sacred baths used in their rituals.[2] The texts mix Biblical and non-Biblical religious writings, including commentaries on the Biblical material, but seem to reflect the Essenes' practices and doctrine.[1][2]

The scrolls are important because they are some of the earliest manuscripts of the Jewish scriptures found in the Jewish Tanakh, which is also the basis of the Christian Old Testament; they also provide an insight into what texts were considered important. Before their discovery, the oldest Hebrew texts of the Bible dated to the 9th or 10th century CE, although there are older translations into Greek and Latin.[1] Therefore, the scrolls offer a useful resource for Biblical scholarship; the problem is that some people want them to be much more than that, and have searched them for imaginary revelations.

For many years after their discovery, access to the scrolls was tightly controlled by a small group of people. In part, this was due to ownership disputes, which are exacerbated by the fact that Israelis and Palestinians don't even agree on who owned the land where the scrolls were found.[3][4] It was only in the 1990s that the full texts became generally available. Wherever there is secrecy, there is a tendency for conspiracy theories and misinformation to spread, and thus people believe a lot of strange things about what is in the scrolls.

The first scrolls were discovered in the winter of 1946-47 by a Bedouin shepherd.[1] In 1954, a selection was offered for sale via a small advertisement in the Wall Street Journal, put on sale by a Syrian who wanted to keep them out of Israeli hands; however, the Israeli government bought them through an intermediary.[3] Since then, there has been a great deal of archaeological study in the desert, with many more documents found.

Confusingly, the name Dead Sea Scrolls may be extended to other texts found at other sites in the desert, which cover a much wider range of sources. These other sites include the Cave of Letters

There were around 230 "biblical scrolls", which contain texts of books in the Tanakh: every book in the Hebrew Bible is present except Esther. Some books were present in multiple copies, with 39 copies of the Psalms and 33 of Deuteronomy. The scrolls also include many non-Biblical works. Some of these are well-known pseudepigraphical texts such as the Book of Jubilees (previously known from Greek and Ethiopic versions). However, many other texts were previously unknown. A group of these are commonly known as "sectarian" texts because they describe the particular beliefs and practices of the sect to which the scrolls apparently belonged.[5]

The Biblical scrolls generally bear a close resemblance to the Masoretic text, the mainstream Hebrew version of the Old Testament, although there are a few differences.[5] Most of the variations are minor, but they do seem to indicate that the text of the Hebrew Bible was more fluid than previously suspected.[5][1] In the case of the Book of Jeremiah, where the Greek Septuagint differs significantly from the Hebrew Masoretic text, the scrolls include not only versions very similar to the Masoretic text, but also other versions very close to the Septuagint, indicating that the Greek translators of the Septuagint probably produced a close translation of a variant Hebrew text, rather than editing it themselves.[6]

In the 1950s, John M. Allegro, an eccentric scholar attached to the scrolls project, claimed that the scrolls offered an uncanny prefiguration of the life and death of Jesus in their account of a Jewish leader called the Teacher of Righteousness. However, the other editors denied that the scrolls said anything of the sort, and Allegro moved increasingly into fringe beliefs, claiming early Christians were all high on mushrooms and when the Eucharist mentions eating the body of Christ, it means consuming psychedelic fungus.[3][7][8] Therefore, his theories are not generally believed.

More recently, Robert H. Eisenman has claimed to find other evidence in the scrolls of belief in a messianic leader who would suffer and die, in contrast to the traditional Jewish idea of a triumphant messianic king. If the scrolls indicate such beliefs, it could prove that Christianity developed out of earlier Jewish ideas, casting doubt on whether it was a genuinely original faith based on divine presence. However, other experts insist that such theories are based on mistranslation.[9]

For many years before the scrolls were made widely available, it was assumed that they were being deliberately kept secret by some mighty power or conspiracy, possibly the Roman Catholic Church, presumably because they would upend the entire basis of Christianity. This theory was disproved when the disputes over the texts' ownership were sufficiently resolved to allow them to be published.[10]

Another theory is that they contain the treasures of the Temple of Jerusalem destroyed by the Romans in 70 CE.[2] There is a lack of evidence for this, and they seem to reflect Essene beliefs more closely than mainstream Jewish beliefs. Claims that they come from Jerusalem possibly reflect hopes that the Ark of the Covenant could be buried nearby.

Dan Brown's fantasy novel The Da Vinci Code co-opts the Dead Sea Scrolls into its overarching conspiracy theory that the Christian church is not telling the truth about Jesus. A so-called expert tells the book's hero that the Scrolls help prove the conspiracy because "troublingly, they do not match up with the gospels in the Bible". This is because they are not Christian texts and therefore nobody would expect them to match the Christian Bible's claims about Jesus.[11]

It is sometimes suggested that Jesus spent time among the Essenes, the presumed authors or keepers of the scrolls, and that Jesus or John the Baptist were Essenes. However, against that idea there is absolutely no evidence to link either man to the Essenes, and Jesus's teachings differed in many ways, notably in that the Essenes were very strict in conformance to Old Testament law, purity rules, etc, while Jesus was relaxed about breaking the Sabbath and other rules, and hung out with "impure" people such as tax collectors.[10]

Because of the complex history of ownership of many of the scrolls, it is suggested that some may be forgeries.[12]

Reclaiming the Dead Sea Scrolls was a 1994 book by Lawrence Schiffman which set out to challenge some of the more ridiculous claims about the scrolls and put them in their historical context as Jewish texts.[13]