The Nag Hammadi library (less accurately known as the Gnostic Gospels[Note 1]) are a collection of Coptic[Note 2] Christian and philosophical writings discovered in 1945 near Nag Hammadi, Egypt. The papyrus itself is generally dated to the 3rd or 4th century CE at the time of burial, though each individual codex has different dates of original composition.

The Christianity-based texts are mostly Gnostic in nature, and were likely buried at a time when the Church (specifically Egyptian Bishop Athanasius) made his decree that non-canonical texts be outlawed. Of the religious writing, the single most critical find was a near-complete copy of the Gospel of Thomas, a set of sayings attributed to Jesus written near the beginning of the Christ-churches (non-Pauline churches) that arose in the 1st century CE.

The texts also contain several non-Christian texts that would have informed Gnostic beliefs, including Plato's Republic and the Greek Hermetica. Despite the religious nature of the texts, they are a source of much secular woo and Conspiracy Theories.

Besides the simple archaeological thrill of "oooh, something really old," the texts have a profound impact on historical understandings of various branches of Christianity that would be destroyed by the singular Roman Empire's version, the Catholic Church. The texts, along with the inclusion of the Greek works, show how important and fully-developed Gnostic ideas were in early Christianity. The texts show a developing scheme of "high philosophy" about the world around, emphasis on the individual, and a new tradition of questioning everything — something unacceptable to the Pauline tradition that depended upon dogma and unquestioning acceptance of authoritative interpretations. A literal take of the texts suggests that Jesus himself was philosophically far closer to the Greeks and the developing Jewish Gnosticism than to the Jewish authoritarianism of Paul.

The late Christopher Hitchens dedicates a segment of his book God Is Not Great: How Religion Poisons Everything to exploring the fascinating implications of the Nag Hammadi texts, writing (in 2007):[1]

Sixty years ago, at Nag Hammadi in Egypt, a trove of neglected "Gospels" was discovered near a very ancient Coptic Christian site. These scrolls were of the same period and provenance as many of the subsequently canonical and "authorized" Gospels, and have long gone under the collective name of "Gnostic." This was the title given them by a certain Irenaeus,

an early church father who placed them under a ban as heretical.

They include the "Gospels" or narratives of marginal but significant figures in the accepted "New" Testament, such as "Doubting Thomas

" and Mary Magdalene. They now also include the Gospel of Judas, known for centuries to have existed but now brought to light and published by the National Geographic Society in the spring of 2006. The book is chiefly spiritualist drivel, as one might expect, but it offers a version of "events" that is fractionally more credible than the official account. For one thing, it maintains as do its partner texts that the supposed God of the "Old" Testament is the one to be avoided, a ghastly emanation from sick minds. (This makes it easy to see why it was so firmly banned and denounced: Orthodox Christianity is nothing if it is not a vindication and completion of that evil story.)

Judas attends the final Passover meal, as usual, but departs from the customary script. When Jesus appears to pity his other disciples for knowing so little about what is at stake, his rogue follower boldly says that he believes he knows what the difficulty is. "I know who you are and where you have come from," he tells the leader. "You are from the immortal realm of Barbelo." This "Barbelo" is not a God but a heavenly destination, a motherland beyond the stars. Jesus comes from this celestial realm, but is not the son of any Mosaic God. Instead, he is an avatar of Seth,

the third and little-known son of Adam. He is the one who will show the Sethians the way home. Recognizing that Judas is at least a minor adept of this cult, Jesus takes him to one side and awards him the special mission of helping him shed his fleshly form and thus return heavenward. He also promises to show him the stars that will enable Judas to follow on.

Deranged science fiction though this is, it makes infinitely more sense than the everlasting curse placed on Judas for doing what somebody had to do, in this otherwise pedantically arranged chronicle of a death foretold. It also makes infinitely more sense than blaming the Jews for all eternity. For a long time, there was incandescent debate over which of the "Gospels" should be regarded as divinely inspired. Some argued for these and some for others, and many a life was horribly lost on the proposition. Nobody dared say that they were all man-inscribed long after the supposed drama was over, and the "Revelation" of Saint John seems to have squeezed into the canon because of its author's

But as Jorge Luis Borges

put it, had the Alexandrian Gnostics won the day, some later Dante would have drawn us a hypnotically beautiful word-picture of the wonders of "Barbelo." This concept I might choose to call "the Borges shale":[Note 3] the verve and imagination needed to visualize a cross-section of evolutionary branches and bushes, with the extraordinary but real possibility that a different stem or line (or tune or poem) had predominated in the labyrinth. Great ceilings and steeples and hymns, he might have added, would have consecrated it, and skilled torturers would have worked for days on those who doubted the truth of Barbelo: beginning with the fingernails and working their way ingeniously toward the testicles, the vagina, the eyes, and the viscera. Non-belief in Barbelo would, correspondingly, have been an unfailing sign that one had no morals at all.

Few, if any, American Christians are even aware of the texts, or they confuse them with the Dead Sea Scrolls.[Note 4] However, an interesting turn in the world of creationists has now seen the Dead Sea and Nag Hammadi texts referenced as some kind of "proof" of Jesus, in response to skeptics' question "what evidence is there that is not Biblical?". Yet at the same time, they will say they are not in any way the authentic words of Jesus. It must be nice to have your cake and eat it too. 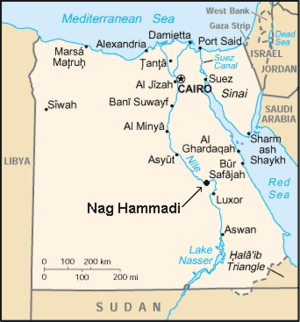 Where on Earth is Nag Hammadi?