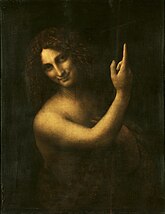 John the Baptist is a figure in the New Testament of the Christian Bible, and is considered a prophet in the Qur'an. He is also briefly mentioned in Josephus' Antiquities of the Jews, so was apparently a real person.[1] His biblical appearance is most famous for its description of his execution, and for his baptism of Jesus. He should not be confused with the disciple John, the Gospel of John, or the author of the Book of Revelation, John of Patmos.

Despite the name, he was not in fact a Baptist; he just did baptisms.

John the Baptist is mentioned in all four canonical gospels. The Gospel of Luke alleges that John's mother Elizabeth was the cousin of Jesus' mother Mary,(Luke 1:36) and that his birth was also heralded by the angel Gabriel (Luke 1:11, Luke 1:19), but no other gospel makes this claim.

John baptised people in the river Jordan, but warned that "one mightier than I cometh, the latchet of whose shoes I am not worthy to unloose," and who would baptise with fire instead of water (Luke 3:16). John thus primarily plays the role of Elijah (see below), heralding the coming of Christ. John also preached repentance for sin (Matthew 3:2, Luke 3:3), as opposed to forgiveness.

John (right) baptises Jesus beneath a dove, while running at him or about to lose his balance and fall on him. Don't ask me who all those other people are supposed to be.

In a number of biblical accounts (e.g. Matthew 3:13-17, Mark 1:9-11) Jesus was baptised by John, following which "heaven was opened" (Luke 3:21, Matthew 3:16) and God spoke etc etc. Following this, Jesus travels into the wilderness and the whole saga begins.

Caravaggio's "The Beheading of St John the Baptist" (1608)

King Herod[note 1] divorced his first wife and married Herodias, who was both the wife of his late brother (Herod Archelaus) and his niece. The Bible claims that John condemned this marriage as unlawful, provoking a quarrel with Herodias. Herod imprisoned John, but wouldn't kill him.[note 2] The story runs that the daughter of Herodias danced for Herod on his birthday, after which Herod promised her whatever she wanted.[note 3] The unnamed daughter conferred with her mother, and asked for John's head. Herod was reluctant to do so, but as he had made an oath to honour any request she made he carried it out.[note 4]

Josephus presents a different account of events.[1] According to him, Herod feared John's power and influence over his followers. Worrying about the potential for rebellion that this devotion presented Herod had John executed. This account excludes reference to a conflict with Herodias or her daughter, along with any reluctance on the part of Herod to do the deed due to his respect for the man. While Josephus thus appears to confirm the existence of John, his record contradicts the biblical narrative.

Josephus mentions John in the context of Jewish opinion of his death. Some time after the execution Herod had been soundly defeated in battle by a neighbouring king (part of a quarrel involving both Herodias and a previous wife). The perception was that this was the judgement of God for John's execution. The order of events here (Josephus has Herod marrying Herodias after John's death) is further contradictory of the biblical account.

Fate of his several heads[edit]

One of John the Baptist's heads on display at the Basilica of St. Sylvester the First, in Rome.

A spectacular relic like the severed head of John the Baptist was a sure temptation to covetousness. As such, his head was miraculously multiplied, and instances of his noggin can be worshipped revered at several locations.

With Revelation 13:1, John may have been the beast John of Patmos described:

A number of biblical passages maintain that John the Baptist was Elijah or "Elias" (Matthew 11:13-14, Matthew 17:12-13, Mark 9:13). This is necessary as part of a prophecy in Malachi that claims that God would send Elijah to prepare the way for the Messiah (Malachi 3:1, Malachi 4:5-6). However, John 1:21 presents the question directly, with John the Baptist denying the charge.

Nevertheless, as the references to the contrary are supposed to have been spoken by Jesus himself, John's own opinion on the matter is irrelevant.[7]

John the Baptist was proclaimed the patron saint of French Canadians in 1908 by Pope Pius X. St. John the Baptist Day (June 24) has long been celebrated as a public holiday in the province of Quebec.

an obscure gnostic religion practiced in southern Iraq, holds John the Baptist as its greatest prophet, while rejecting Jesus.