Ark of the Covenant

Doesn't matter whether it is single or a set, it looks face-meltingly great in any living room!

The Ark of the Covenant was a holy relic for the Israelites which contained the tablets upon which the Ten Commandments had been written.

The Ark was built per instructions given by (apparently) God to Moses when the Israelites wandered the desert, recorded in Exodus 25:10-22. It measured 2.5 cubits (around 45 inches) in length, 1.5 cubits (around 27 inches) in both height and width. It should have been constructed out of acacia wood and gold plated on both the inside and the outside, and the lid was adorned with twin cherub statues.

The exact contents of the Ark vary depending on whether one is gleaning its contents from the Old or New Testament. According to the Old Testament, the contents are said to be the original stone tablets containing the Ten Commandments. However, it has been debated whether both tablets are contained within one Ark, or for that matter, if they even exist. Yet according to the New Testament, the inventory sheet has grown to include Aaron's staff and a golden jar of manna in addition to God's Top 10 List of Don'ts.

The Ark is perhaps most well known for its capabilities as "a radio for speaking to God", as well as the fates for those who misuse it. The Ark served as God's only material connection to the world[note 1]. According to the Bible, when God wanted to speak to Moses, he would do so out of the twin cherubs with a cloud becoming visible.

The Ark also supposedly killed those who would misuse it through holy fire and other such phenomena. However, given the conditions of the desert, as well as gold's ability as a conductor, some scholars believe that these deaths could be attributed to a severe static shock. The facts of this will soon be revealed by top men.

It has been suggested by some experts that in common with religious traditions of other tribes, the Ark may have contained emblems or statues of other gods such as Baal or El which the early Israelites also worshipped; the stones with the Ten Commandments may have been a later substitution.[1]

After the Ark was constructed, it was carried by the Israelites through the desert to the "promised land", and then accompanied Joshua in his conquest of Canaan. It was then kept at Shiloh

, the main religious centre before the founding of the First Temple in Jerusalem. The Philistines took it after defeating the Israelites, but God hit them with plagues (of hemmorhoids—the less fun kind of 'roid rage) until they returned it, and it was stored for 20 years at Kiriath-Jearim

9 miles from Jerusalem. King David then moved it to Jerusalem, and Solomon later placed it in the newly constructed first Temple in Jerusalem, its most famous home.[1]

However, after David brings the Ark to Jerusalem it seems to largely disappear from Jewish history, long before it is ostensibly lost. While it was carried into battle by Joshua, it doesn't feature in stories of the kings of Israel. For this reason, some scholars believe the story of the Ark was a separate tale later incorporated into the main historical narrative. The Ark may not actually have been brought to Jerusalem until much later: indeed 2 Chronicles 35 includes the curious detail that the post-Exile king Josias tells the Levites: "Put the sacred ark in the temple that Solomon son of David king of Israel built. It is not to be carried about on your shoulders."[1]

The whereabouts of the Ark are currently unknown. It was lost when the First Temple was destroyed by the Babylonian empire. Some believe it was hidden prior to the attack, in a cave near the Dead Sea, or in possession by the United States in some classified location.

Christians in Ethiopia claim they have it at the Church of Saint Mary of Zion, where it is guarded by the "Keeper of the Ark".[2] It is, of course, kept conveniently out of sight.

There are claims that it was hidden before the Babylonian army arrived, and may be buried deep underneath Temple Mount.[3]

Other silly stories suggest that the Knights Templar or other Crusaders brought it to Europe, with suggested destinations including Chartres Cathedral; Rennes-le-Château, France; Basilica of St. John Lateran, Rome; Herdewyke in Warwickshire, England; and the Hill of Tara, Ireland.[4]

Or perhaps it never existed in the first place. Take your pick. 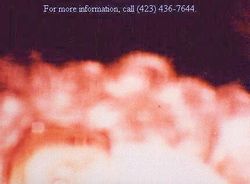 Wyatt's rather blurry photo of the Ark of the Covenant. Alternatively, it may be a photo of a giant brain. Or cotton candy. We report, you deride decide.
See the main article on this topic: Pseudoarchaeology § Biblical archaeology

Pseudoarchaeologist kook Ron Wyatt's alleged discovery of the Ark of the Covenant is, like his other "discoveries", incredibly light on evidence. Photos taken during Wyatt's excavations in the Garden Tomb area in Jerusalem are blurred and Wyatt's original records have been removed from circulation.[5]

There is certainly a chamber at the site, the purpose of which remains unknown, but Wyatt's claim to have seen a chest of beaten gold is supported only by the blurry photos he took. It is also alleged that he saw a giant sword, possibly formerly belonging to Goliath,[6] and certainly not broken off from a huge statue somewhere.

The site of the Ark was also claimed by Wyatt to be below the site at which Christ was crucified. Wyatt is claimed to have found a strange black substance, later tested and found to be human blood. It's claimed to be the blood of Jesus because it contains half the number of chromosomes that would normally be present in a human male. Human males normally have 46 chromosomes, with 23 coming from the mother and 23 from the father. Jesus, having been the product of parthenogenesis, would have only obtained 23 chromosomes from his mother, Mary.[note 2] Of course, this ignores the fact that a person missing half their chromosomes would be unlikely to develop in any normal sense as a human being.[note 3]

Wyatt and his supporters have not explained how the tests on the blood were performed, nor have they released the data necessary to confirm their claims.

proposed that the Ark of the Covenant contained a nuclear reactor. Supposedly, the Ancient of Days described in Exodus was a device that stored algae, the manna that the Israelites ate to survive. The ark ran for 6 days but required the seventh day to rest, proposed to be the origin of the Sabbath.[7]