Sacrifice is the practice of offering food, or the lives of animals or people to the gods, as an act of propitiation or worship. The term is also used metaphorically to describe selfless good deeds for others.

The theology of sacrifice remains an issue, not only for religions that continue to practice rituals of sacrifice, but also for those religions that have animal sacrifice in their scriptures, traditions, or histories, even if sacrifice is no longer made. Religions offer a number of reasons for why sacrifices are offered.

In the Bible, two sorts of animal sacrifice are set forth. One is the burnt offering, also historically called the "holocaust",[note 1] which was entirely destroyed by fire. This was offered to expiate for sin or other ritual impurity.[4]

Other animal sacrifices offered by Jews during the Temple period were voluntary, such as the offering of thanksgiving[5] that was offered voluntarily as an act of worship, and consumed as a holy feast by the offeror and his family.[6]

In Judaism, a sacrifice is known as a Korban from the Hebrew root karov meaning to "[come] Close [to God]". Medieval Jewish rationalists like Maimonides reinterpreted the need for sacrifice. In this view, God always held sacrifice inferior to prayer and philosophical meditation. However, God understood that the Israelites were used to the animal sacrifices that the surrounding pagan tribes used as the primary way to commune with their gods. As such, in Maimonides' view, it was only natural that Israelites would believe that sacrifice were be a necessary part of the relationship between God and man. Maimonides concluded that God's decision to allow sacrifices was a concession to human psychological limitations. It would have been too much to have expected the Israelites to leap from pagan worship to prayer and meditation in one step. In the Guide to the Perplexed he writes:

The teachings of the Torah and Tanakh reveal Judaism's abhorrence of human sacrifices. 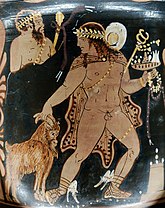 Hermes leads a goat to the sacrifice

This type sacrifice is the ritual killing of an animal as part of a religion. It is practiced by many religions as a means of appeasing a god or gods or changing the course of nature. Animal sacrifice has turned up in almost all cultures, from the Hebrews to the Greeks and Romans and from the Aztecs to the Yoruba. Animal sacrifice is still practiced today by the followers of Santería as a means of curing the sick and giving thanks to the gods.

Islam continues to offer an animal sacrifice at the feast that commemorates the sacrifice of Abraham, although in practice the sacrifice is consumed by the Muslims themselves as a part of a feast.[8]

Many varieties of Hinduism continue to offer animal sacrifices. The Vedas prescribe an elaborate ritual for sacrificing a horse; this is a very ancient practice that can be traced back to the Indo-European roots of the Hindus.[9] Other Hindus have substituted purely vegetable sacrifices for the animal sacrifices prescribed by the ancient texts.[10]

Human sacrifice was practiced by many ancient cultures. People would be ritually killed in a manner that was supposed to please or appease some god or spirit. While not widely known, human sacrifices for religious reasons still exist today in a number of nations, including India. In France and Britain, Druids were said to preside over human sacrifices, in the account of their activities handed down by Julius Caesar.

Some occasions for human sacrifice found in multiple cultures on multiple continents include: